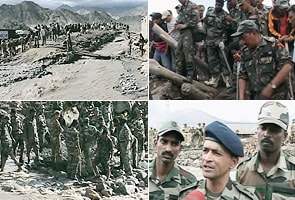 Leh, Ladakh: In the midst of all the tragedy in Leh are stories of the bravehearts like Havaldar Paljor, who are fighting all odds to help in rescue efforts.

As the flash flood hit Leh, Paljor's unit was the first one to be called in for rescue. As he began his work, he got to know word that his parents were badly hurt in the disaster. But the veteran soldier refused to leave his job, even his Commanding officer could not change his mind.

"How can I leave my job when so many people were affected," said Havaldar Paljor of the Ladakh Scouts.

Paljor was not alone. Colonel Kedar Gokhale, an Army engineer, was literally caught in the torrent unleashed by the cloudburst. But instead of ducking for safety, Gokhale and his men waded into waist-deep slush to extricate dozens of civilians from the on-rushing water.

"I immediately took my driver and my buddy here. Three of us assisted them in ferrying 8-10 civilians out of the slush. It was getting impossible to move in the slush," said Gokhale.

And then there is Sepoy Pervez Khan of the Army Service Corps, who saved several colleagues buried under the debris at Nimu, 40 kilometres from Leh. For his bravery, Khan was given an on-the-spot commendation medal by the Northern Army Commander.

Without these bravehearts, the devastation in the freak flash floods in Ladakh's capital would have been far, far worse.
Comments
Leh flash floodscloudburstLeh's bravehearts