Lok Sabha Elections 2019: A probe ordered by the local election officer in Leh has found a initial case of bribery Ravinder Raina and Vikram Randhawa following a complaint by a group of journalists that they were offered cash. 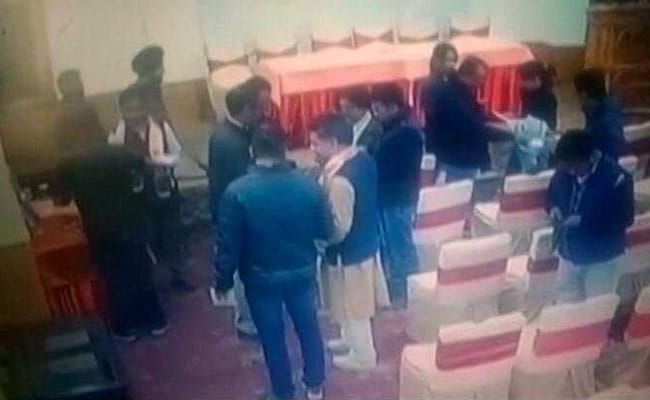 A video clip shows envelopes being given to journalists at a press conference in Leh.

A case has been filed against the chief of the BJP in Jammu and Kashmir and a legislator in the state after journalists in the mountainous town of Leh alleged that the BJP leaders were trying to bribe them last week. The complained was filed after a local court asked the police to file a case against the two leaders.

Jammu and Kashmir BJP chief Ravinder Raina and legislator Vikram Randhawa have been booked under charges of bribery and undue influence in elections. Both offences are punishable with upto one year imprisonment for each offence.

A probe ordered by the local election officer in Leh has found an initial case of bribery following a complaint by a group of journalists that the BJP leaders offered them cash in envelopes at a press conference on May 2.

The journalists had accused the BJP of "trying to bribe reporters for favourable coverage" to influence the national election.

A widely-shared video clip shows envelopes being given to journalists at a press conference at a hotel in Leh.

In the CCTV clip, Jammu and Kashmir BJP chief Ravinder Raina is seen with journalists and a party legislator, Vikram Randhawa, is seen giving them envelopes to journalists.

Rinchen Angmo, one of the journalists, told NDTV that a senior party leader handed over envelopes to four journalists, including her, in front of Mr Raina. The leaders told them its a token of love and asked them not to open the envelopes in the hall, she said.

"When we asked what is in the envelope, they told us not to open it then and that it is a token of love. When I checked, I saw many Rs. 500 notes. I returned it to them. But they refused to take it back. So I kept it on the table," Ms Angmo said.

The video also shows Ms Angmo leaving her envelope on the table.

NDTV cannot verify the authenticity of the video.

"We don't believe in bribing anybody. We hold journalists in high esteem. BJP has never done such a thing and we will never do it," a BJP leader said.

The episode triggered reactions from Jammu and Kashmir politicians Mehbooba Mufti and Omar Abdullah who called for action after the video emerged.

The Ladakh region, that voted on Monday in the fifth phase of the Lok Sabha election, witnessed a four-cornered contest between the BJP's Tsering, Rigzin Saplbar of the Congress, Sajjad Hussain backed by the National Conference and Peoples Democratic Party, and independent candidate Asgar Ali Karbalai.

The Muslim community enjoys a slender majority in Ladakh but both the Congress and the BJP fielded Buddhist candidates.

The BJP had won Ladakh in the 2014 election by defeating the Congress candidate by just 36 votes. The party, however, suffered a setback after lawmaker Thupstan Chhewang resigned from the BJP in November. Several other leaders from Ladakh also left the party.