On his arrival in Patna, Lalu Yadav was asked about reports suggesting that he might hand over the top RJD post to younger son Tejashwi Yadav. 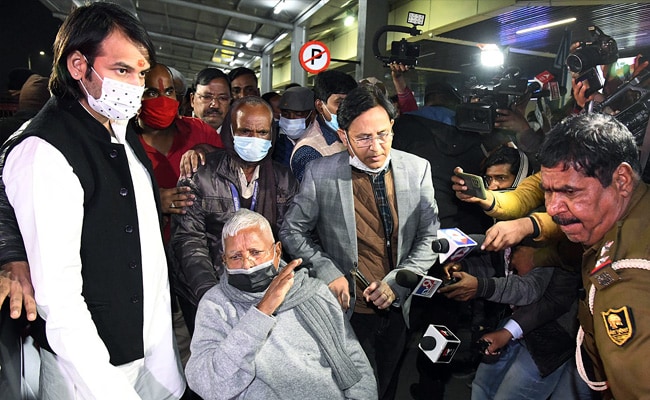 Lalu Yadav said RJD's national executive is scheduled on February 10 which he will be attending.

Rashtriya Janata Dal (RJD) president Lalu Yadav on Tuesday made it clear that he had no plans to loosen his grip over the party he founded 25 years ago, putting paid to speculations triggered by his frail health, old age and legal wrangles.

Mr Yadav, who arrived on his home turf in Patna after a gap of over two months, shared his thoughts before boarding his flight from Delhi.

"All this speculation is stupid," the otherwise jovial septuagenarian snapped when asked about reports in a section of the media suggesting that in Patna he might hand over the top party post to younger son and heir apparent Tejashwi Yadav.

Sharing details of his itinerary, the RJD chief said "our party's national executive is scheduled on February 10 which I will be attending. On 15th, I will visit Ranchi, appear before the court and return".

Mr Yadav has been convicted in fodder scam related cases. On February 15, the CBI court at Ranchi is expected to give its verdict in the Doranda Treasury case.

If convicted, the Chief Minister of undivided Bihar in 1990s may end up in jail again. He was released on bail less than a year ago.

Suffering from multiple afflictions like diabetes, heart and kidney problems, Mr Yadav has been spending most of his time at his Rajya Sabha MP daughter Misa Bharti's residence in the national capital, under strict medical supervision.

The RJD chief sought to make light of the infighting within the ruling NDA in Bihar, over issues like special status for the state, but underscored that the demand was first raised when his party was in power.

The wily leader chuckled when asked about BJP MP Chhedi Paswan's remark about his bete noire Nitish Kumar which has rattled the Bihar Chief Minister's JD(U).

"There can be no doubt that Nitish has no qualms about aligning with anybody for power", said Mr Yadav in an indirect reference to Mr Kumar's abandonment of RJD and return to NDA in 2017.

Upon reaching Patna, the colorful leader was greeted by a swarm of supporters at whom he nodded, seated in a wheelchair.

However, Mr Yadav exchanged no words with local journalists who had been waiting at the airport for hours.

He drove straight to the residence of Rabri Devi, his wife who had also succeeded him as the Chief Minister.

As is always the case whenever the legendary crowd puller politician is in town, the residence at 10, Circular Road remained as busy with activity as a beehive.

Cop Killed In Grenade Attack By Terrorists In Jammu And Kashmir: Police