Lalu Prasad Yadav grabbed eyeballs today for a photoshopped image posted from his official twitter account where the crowd in his mega rally seemed larger than they in fact were. 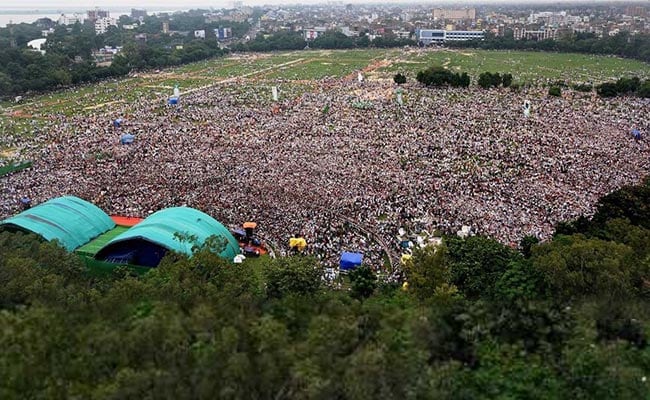 But what sparked the buzz online from the "BJP bhagao desh bachao" rally was a morphed picture shared by Lalu Yadav on Twitter. The image appeared to have been digitally altered to show a larger crowd than real.

No "Face" will stand in front of Lalu's "Base". Come & Count as much as u can in Gandhi Maidan, Patna #DeshBachaopic.twitter.com/sXoAcpwNKw

Today in Patna, thanks to Photoshop, Lalu Yadav and his illustrious progeny demonetised the crowd.

Sarcasm made an appearance as well

Only haters will say this is Photoshop.
I knw this crowd is real ppl evn came from Africa, yuganda and timbaktu alsohttps://t.co/ffbc5bIrwr

Either give Rs 2000 and get huge crowd or photoshop the pic.

Photoshop invented by Modi Ji in 2013-14 and successfully grab by all political parties.

Some even offered help to the leader who recently ended alliance with Bihar Chief Minister Nitish Kumar. They shared images they thought were photoshopped better.

Today in Patna, thanks to Photoshop, Lalu Yadav and his illustrious progeny demonetised the crowd. #LaluBaba40Chorpic.twitter.com/UaIesoFXKI

Promoted
Listen to the latest songs, only on JioSaavn.com
ghatiya #photoshop se
I support #BahubaliTejashwi