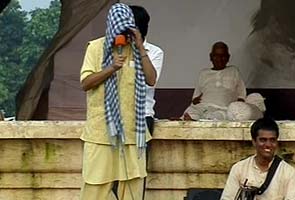 New Delhi: Staying defiant over her infamous 'ghoonghat act' at the Ramlila Ground on Friday, in which she mocked politicians hiding behind masks, Kiran Bedi, a former IPS officer and a close aide of Anna Hazare, has refused to apologise.

"Sorry no apology for being demonstratively a voice of public anguish. Prepared for any punishment," Ms Bedi tweeted this evening.

Yesterday, speaking to NDTV, Ms Bedi said her act at the Ramlila Ground turned out to be the game-changer. She also said it was an act totally against her grain, but has to be seen in the context of what was happening then. Ms Bedi also claimed her act led to senior BJP leader LK Advani calling her up and promising that the issue would be sorted out the next day.

Ms Bedi expressed no regrets even as MPs today filed notices for privilege motions in Parliament against her and actor Om Puri for mocking at and passing caustic comments against lawmakers. MPs in both Rajya Sabha and the Lok Sabha have given notices against the two for the "derogatory and defamatory" comments.

Mr Puri today apologised for calling MPs "anpadh" (uneducated) and "nalayak" (incompetent) at the Ramlila Maidan during Hazare's fast last week. He said he was ready to face any action by MPs. "If they are still angry with me, I will take whatever punishment they give me."

"The matter is under my consideration. I have received notices on the question of privilege," she said in the Lok Sabha after she received the complaints.

Similar notices were also given in the Rajya Sabha where Deputy Chairman K. Rahman Khan said he would convey the sense of the house on the issue to Chairman Hamid Ansari.

If the notices are admitted, the privilege committee will quiz the accused and recommend action against them.