Tamil Nadu, Telangana, Karnataka and Gujarat followed Kerala among the top five states delivering good governance, according to the report. 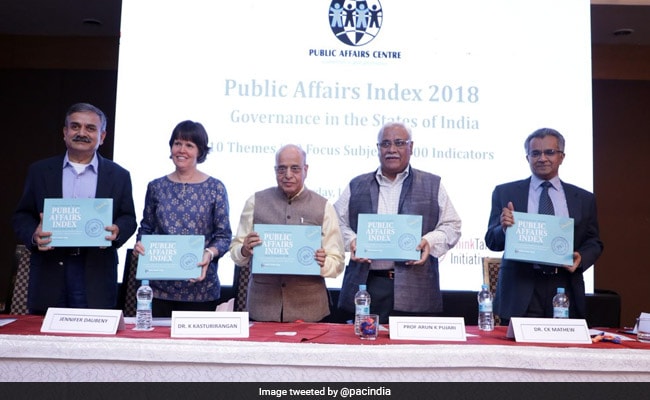 The report released annually since 2016 evaluates the states on a framework based on government data.

Kerala stands as the best governed state in the country and Karnataka is in the fourth position, said the Public Affairs Index 2018 released by the think tank Public Affairs Centre (PAC) in Bengaluru.

"Kerala has topped the Public Affairs Index (PAI) for 2018 as the best governed state for the third consecutive year since 2016 among large states," said Bengaluru-based PAC at an event in Bengaluru on Saturday evening to release its third annual PAI.

Released annually since 2016, the index examines governance performance in the states through a data-based framework, ranking them on social and economic development they are able to provide.

Founded in 1994 by renowned Indian economist and scholar late Samuel Paul, the think tank works to mobilise a demand for better governance in the country.

Tamil Nadu, Telangana, Karnataka and Gujarat followed Kerala among the top five states delivering good governance, according to the report.

Madhya Pradesh, Jharkhand and Bihar ranked the lowest on the PAI, indicating higher social and economic inequalities in the states.

Among smaller states (with population less than two crore), Himachal Pradesh topped the list, followed by Goa, Mizoram, Sikkim and Tripura which figured among the top five states with good governance.

Nagaland, Manipur and Meghalaya were ranked at the bottom of the index among small states.

As a young country with growing population, India needs to assess and address its developmental challenges, said the Chairman of PAC, K Kasturirangan, on the occasion.

"The PAI 2018 is one example of a data-based framework that provides some basis, even if rudimentary, to assess the performance of states in India," added Mr Kasturirangan, the former Chairman of Indian Space Research Organisation (ISRO).

The think tank has undertaken the study across all the Indian states considering them across 10 themes such as essential infrastructure, support to human development, social protection, women and children as well as law and order.

"The index provides a multi-dimensional and comprehensive matrix that attempts to capture the complexities of governing the plural and diverse people of this sub-continent," added Senior Fellow at PAC CK Mathew.

The states were divided into two categories, large and small, on the basis of their population. States with more than two crore population were considered large.

A total of 30 focus subjects and 100 indicators were measured to derive the PAI, relying solely upon government data.

The PAC said it was not keen to access private data sources that may be interpreted as "biased".

This year's PAI also included a separate index on the children of India, giving a measure of how child-friendly each of the states are.

Kerala, Himachal Pradesh and Mizoram topped the index on being the states to provide better living conditions for all children.

The former chairperson of the National Commission for Protection of Child Rights, Shantha Sinha, who was present on the occasion, delivered the Samuel Paul Memorial Lecture, drawing attention to children''s rights in the country.

"Children growing up in poverty cannot be blamed for their situation and it is the state''s responsibility to ensure that they are provided with opportunities for a better living," Ms Sinha said.