Kerala MLAs Sworn In As First Session Of Assembly Begins

A total of 136 legislators of the 140-member-strong Kerala House took the oath of office during the over three-hour-long assembly session. 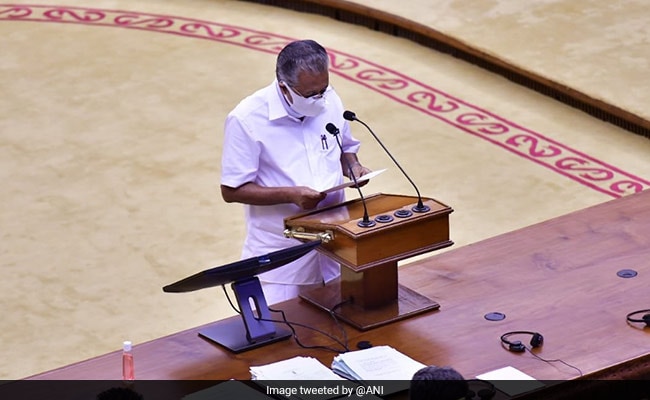 The first session of the 15th Kerala Legislative Assembly began today with the swearing-in of newly-elected MLAs, of whom 53 are fresh entrants, under strict COVID-19 protocols. As many as 136 legislators of the 140-member-strong House took the oath of office during the over three-hour-long session which began at 9 AM.

Three legislators -- K Babu (Nenmara),M Vincent (Kovalam) and V Abdurahiman (Tanur), who is also the Sports minister -- could not make it on Monday due to health reasons.

Kunnamangalam MLA, PTA Rahim, who was the Pro Tem Speaker of the House, was already sworn in in front of Governor Arif Mohammed Khan at Raj Bhavan last week.

He administered the oath of office to the new legislators after calling them according to alphabetical order.

Indian Union Muslim League MLA, Abdul Hameed Master, who represents Vallikkunnu constituency in the House, was the first member to be sworn in while CPI(M)'s Wadakkanchery MLA Xavier Chittilappilly was the last one to take the oath.

Chief Minister Pinarayi Vijayan, who scripted his name in the history of the House as the first chief minister in the last four decades to assume office for a second consecutive time, made a solemn affirmation, while some of his cabinet colleagues took oath in the name of the God.

Health Minister Veena George, who replaced KK Shailja in the new cabinet, took oath in the name of the almighty.

Barring a few legislators who took oath in English, the majority of the MLAs used Malayalam, the mother tongue.

RMP leader KK Rema, who represents Vadakara constituency in the House, arrived wearing a badge with the picture of her husband TP Chandrasekharan, who was murdered by political goons allegedly with the knowledge of the Marxist party leadership years ago.

Mr Vijayan and his son-in-law PA Mohammed Riyas, who is also the PWD and Tourism Minister, sharing the floor of the House together was an interesting scene.

The opposition Congress-led UDF side witnessed a major change as vibrant leader VD Satheesan replaced his senior Ramesh Chennithala as the opposition leader following the drubbing of the front in the polls.

Mr Chennithala, who had led the UDF for the last five years, shifted to the second row of the opposition benches.

Unlike the previous five years, there was no MLA for the BJP-NDA as they lost the lone Nemom seat in the recent polls.

Meanwhile, Indian National League (INL) got its first minister in the House through Ahmmed Devar Kovil.

Besides the Chief Minister and ministers K Krishnan Kutty (JD-S) and A K Saseendran (NCP), all the other 18 ministers of the 21-member cabinet are fresh faces this time.

Former Chief Minister Oommen Chandy, who has been elected to the House for the 12th consecutive time from his home constituency Puthuppally, is the senior-most member in the Assembly in terms of experience, followed by Kerala Congress leader PJ Joseph who has been elected 10 times.

Strict guidelines were in place to ensure compliance to COVID protocols in the Assembly and its premises.

Visitors' passes were not issued this time considering the pandemic spread.

Arrangements have also been made for the legislators, journalists and other office staff to undergo antigen tests on the Assembly campus.

The House would witness the election of the new Speaker on Tuesday.