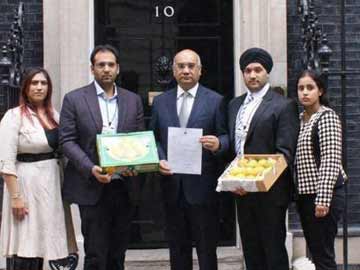 Leicester East MP Keith Vaz and representatives of retailers and importers of mangoes pose for a photo before delivering two boxes of Alphonso mangoes to British PM David Cameron at Downing Street in London on April 29, 2014.

"The Prime Minister has shown that he is a champion of our relationship with India. I understand that the Indian government has complied with the rules set out by the EU and there is, therefore, no reason for this ban to go ahead. It will cost millions of pounds of lost revenue to the British economy and result in millions of mangoes going to waste in India," Mr Vaz said.

Mr Vaz has also been campaigning against the ban on behalf of his constituents in Leicester, which hosts an annual mango festival. He has also written to the European Commission president and also plans to make a representation to Cameron.

Promoted
Listen to the latest songs, only on JioSaavn.com
The 28-member European Union has temporarily banned the import of Alphonso mangoes and four kinds of vegetables from India from May 1, sparking protests from the Indian community, lawmakers and traders.