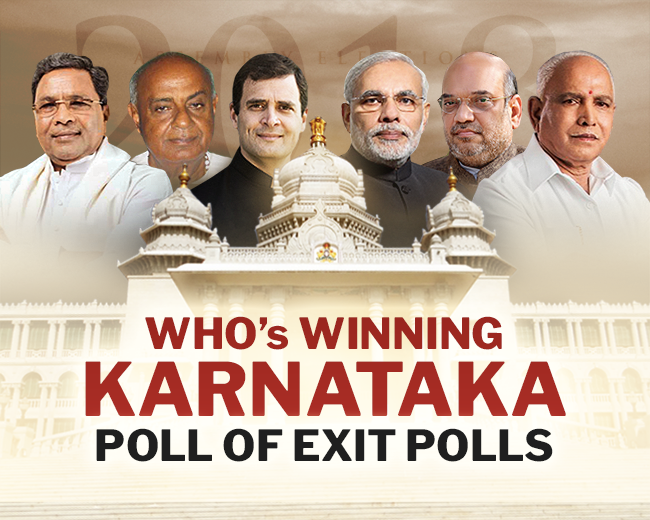 Karnataka exit poll predicts a hung assembly in the state

New Delhi: NDTV's poll of exit polls indicate a tight race between the BJP and the Congress with the JD-S likely to play the kingmaker. According to the poll BJP is emerging as the single largest with a hung assembly in the state. Polling ended for Karnataka assembly election 2018 at 6pm with 70 per cent voter turnout as against 72 per cent people casting vote during the last assembly election in the state. Single phase polling for Karnataka Election 2018 was held for 222 out of 224 seats in a three-cornered contest among the ruling Congress, the BJP and former Prime Minister D Deve Gowda's JD(S) or Janata Dal (Secular).The Siddaramaiah-led Congress government in the state faced a tough challenge from the BJP which is hoping to return to power in Karnataka, the only southern state it has ruled. The final days of the aggressive campaigning saw Rahul Gandhi and Prime Minister Narendra Modi in a bitter war of words.

Here are the Highlights on Karnataka Election 2018 Poll Of Exit Polls:

May 12, 2018 22:16 (IST)
Parties thank people, hope their support is in their favour
As polling for the Karnataka assembly closed, Chief Ministerial aspirants of both national parties, Congress and the BJP, thanked people for participating in the election process and expressed hope about public support in their favour, reports PTI.
"Dear People of Karnataka, Thank you for exercising your franchise today.I thank all the officers & staffconnected with conducting the Election for their hard work & sincerity," Chief Minister Siddaramaiah said in a tweet.
BJP's chief ministerial candidate B S Yeddyurappa said his party is headed towards a landslide victory with the support of the people. "Thank you Karnataka! Gratitude to the people of Karnataka for voting in large numbers today".
JD-S leader HD Kumaraswamy in a tweet said, "I sincerely thank all the voters of Karnataka for coming out in large numbers to exercise their franchise andensuring that polling process was peaceful." 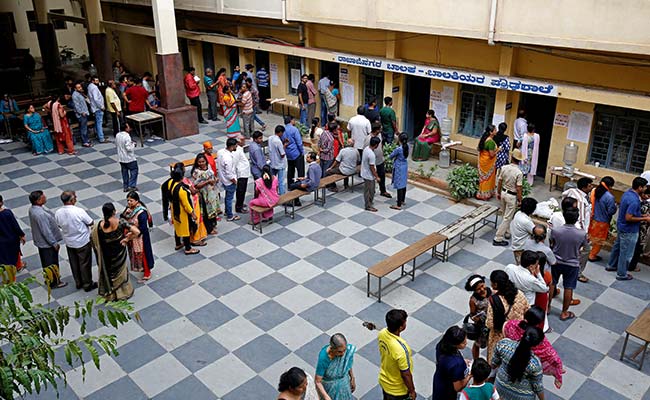 Read: Before Voting, High-Profile BJP Candidate Sriramulu Performs Cow Worship
B Sriramulu, one of the most prominent candidates fielded by the BJP in the Karnataka election, performed a "gau puja (cow worship)" before casting his vote on Saturday. He was seen in images performing the ritual dressed in all-saffron, next to a cow smeared with turmeric.
May 12, 2018 21:47 (IST)
Siddaramaiah To NDTV On Needing JDS Help After Karnataka Exit Polls
Karnataka Chief Minister Siddaramaiah on Saturday deflected a question on asking Deve Gowda's Janata Dal Secular or JDS for help after the Karnataka exit polls predicted a hung house, saying, "The situation doesn't arise." Multiple exit polls on Saturday showed conflicting results, some giving an edge to the Congress while some had the BJP ahead. An average of the polls, however, showed a hung house, with the JDS emerging as the kingmaker. 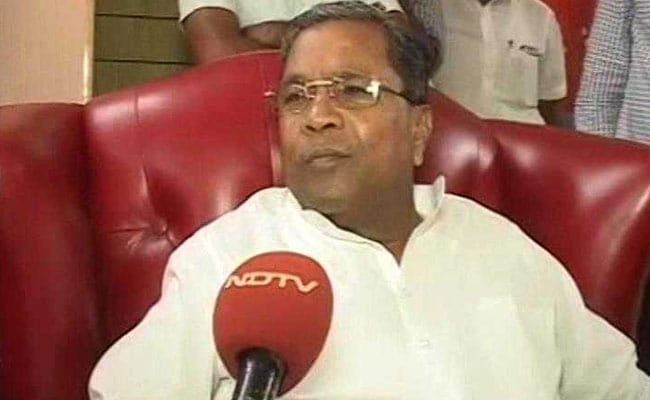 May 12, 2018 21:46 (IST)
Congratulations to the voters of Karnataka: Election Commission
A 70 per cent voter turnout was recorded in the high-stakes Karnataka Assembly polls today, the Election Commission (EC) said. The last Assembly election in the southern state in 2013 had witnessed 71.4 per cent polling, the poll panel said.
"I want to congratulate the voters of Karnataka. Till 6 pm, the voter turnout in the state was 70 per cent. Barring a few polling stations, voting has been completed at almost all," Senior Deputy Election Commissioner Umesh Sinha told reporters here. "By the time we get the final figure, we will have a better turnout than the last election," he added. The poll percentage is likely to go up as voters were seen standing in the queue at certain polling stations even after 6 pm.
Voting was held in 222 of the 224 Assembly seats in Karnataka, in a three-cornered contest involving the ruling Congress, the BJP and former prime minister H D Deve Gowda's JD-S. Read: All Votes At This Bangalore Booth Go Only To 'Lotus', Tweets Congress Leader Brijesh Kalappa
The ruling Congress in Karnataka alleged that Electronic Voting Machines (EVMs) had malfunctioned in parts of the state as voting took place across 222 constituencies on Saturday.
May 12, 2018 21:34 (IST)
A round up of Karnataka exit polls at around 9 pm show a hung house but the BJP is seen getting about 97 while the Congress could get 90 seats. 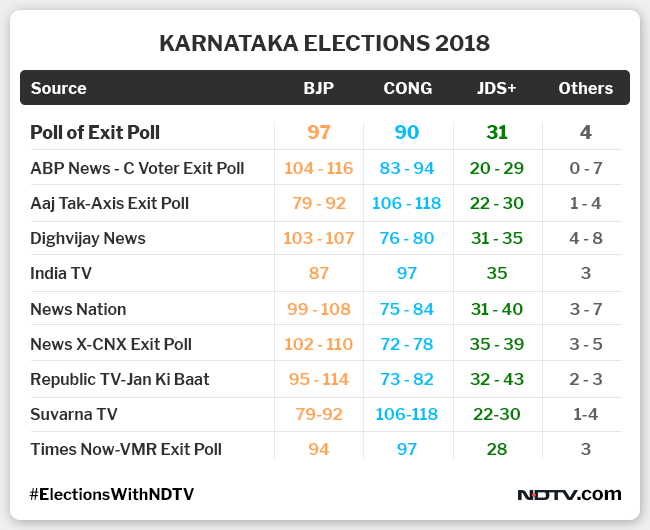 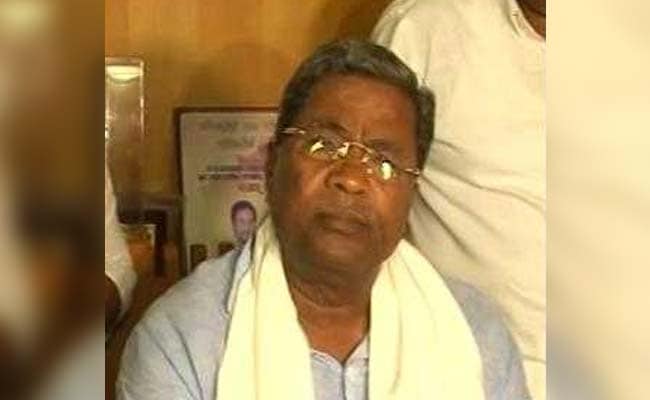 Opinion: By Deriding Rahul, Modi Proves He Is Rattled By Him
Today, Narendra Modi is suffering from a serious credibility crisis. His misunderstanding or misrepresentation of history and non-performance have put a question mark over his leadership.
May 12, 2018 20:28 (IST)
BJP to get 102-110 seats, shows Praja TV exit poll
Karnataka's Praja TV predicts BJP getting 102-110 seats, while Congress winning 72-78 seats. The exit poll predicts 35-39 seats for JD-S and 0-5 seats for other parties. 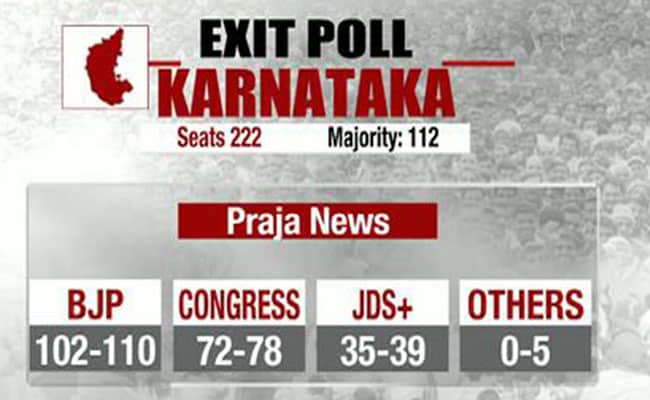 May 12, 2018 20:13 (IST)
Exit polls predict a hung house in Karnataka
Indicating a tight race between the BJP and the Congress, most exit polls for the Karnataka Assembly elections today forecast a hung assembly with the JD-S likely to play the kingmaker, but were divided on which of the two national parties will emerge as the largest in the House.
The Congress had won 122 seats last time following a split in the BJP, which was reduced to 40 seats while the JD-S also got 40 seats. 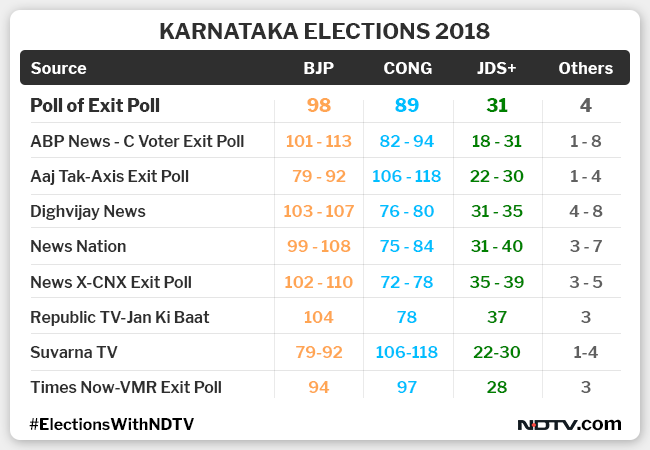 May 12, 2018 20:09 (IST)
Polls Apart: While three exit polls project Congress emerging as the single largest party, five others predict a BJP coming out as the largest party. 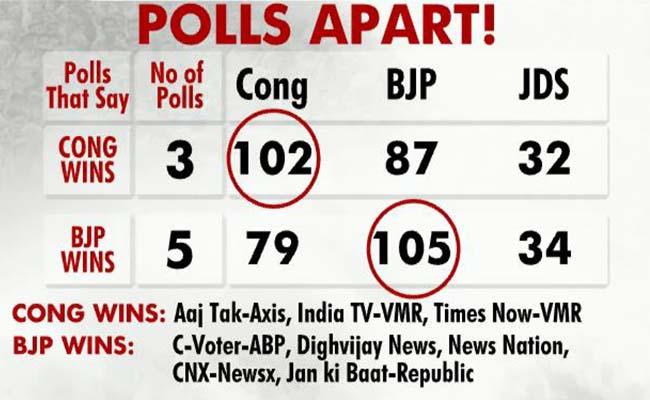 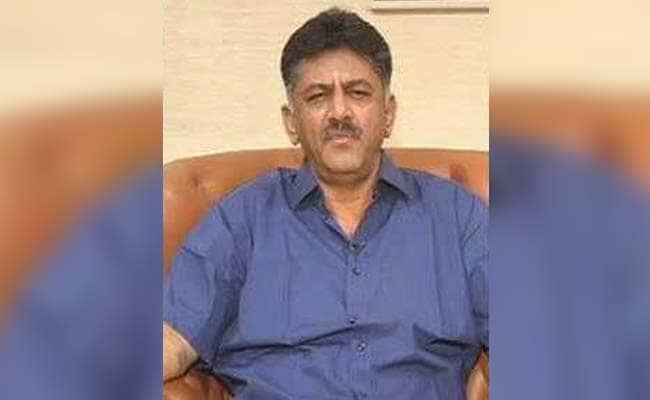 Watch: NDTV's Poll Of Exit Polls On Karnataka Elections
Karnataka could return a split verdict with the BJP as the single largest party and former Prime Minister HD Deve Gowda a kingmaker, an aggregate of eight exit polls show.
May 12, 2018 19:37 (IST)
105-109 seats for BJP, shows News Nation exit poll
News Nation exit poll predicts 105-109 seats for the BJP. It predicts 71-75 seats for the Congress. For JD-S the exit poll predicts 36-40 seats. Other parties will be winning 3-5 seats in Karnataka assembly election 2018, shows News Nation exit poll.
May 12, 2018 19:27 (IST)
If Siddaramaiah wins he will be unassailable: Sagarika Ghose
At the NDTV's panel discussion on exit polls, senior journalist  Sagarika Ghose says, "Deve Gowda's scenario number 1 is for alliance with Siddaramaiah, but Shivakumar is himself a tall Vokkaliga leader. The fact is if Siddaramaiah wins again, then he will be unassailable and become a big national player.
May 12, 2018 19:19 (IST) 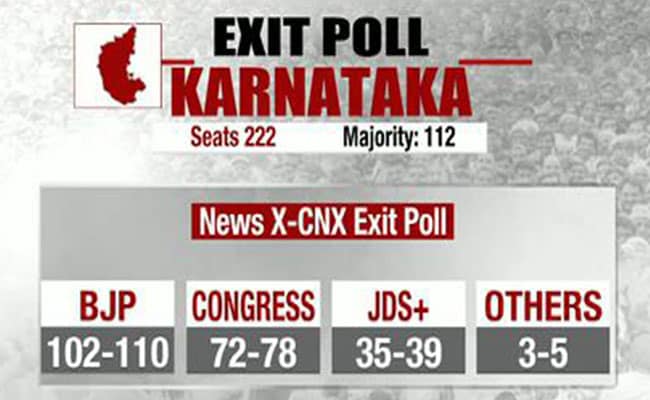 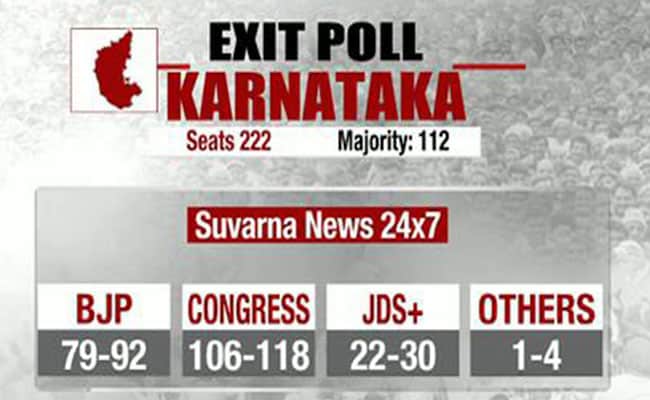 May 12, 2018 18:36 (IST)
Times Now-VMR Exit Poll predicts a hung assembly in Karnataka with Congress being the single largest party. It projects BJP winning 80-93 seats and Congress getting 90-103 seats. JD-S is projected to win 31-39 seats.
May 12, 2018 18:33 (IST)
First test of Rahul Gandhi's leadership
This is the first test of Rahul Gandhi's leadership since he took charge as party chief in December. A party needs 113 seats for a majority in 224-member Karnataka assembly. The turnout of voters had been high all day, which is expected to be an important factor in the results. Around 64 per cent had voted till 5 pm. 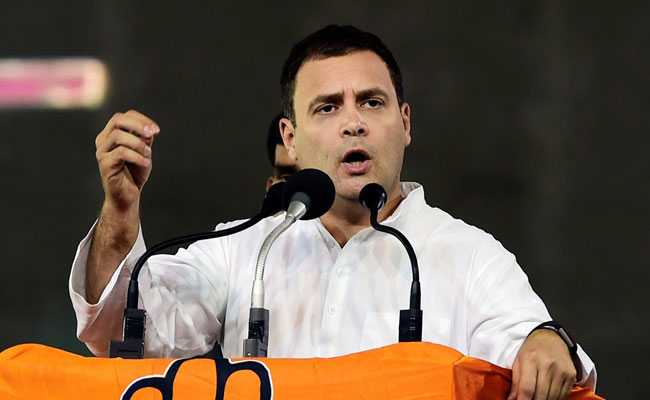 May 12, 2018 18:29 (IST)
Voting in Karnataka has ended at 6pm
Karnataka voted today in a tight election that will decide the future of the Rahul Gandhi-led Congress, which is fighting to retain control of its last major state against a fierce campaign by Prime Minister Narendra Modi to win another opposition-ruled state and secure a beachhead in the south ahead of his re-election bid in 2019. 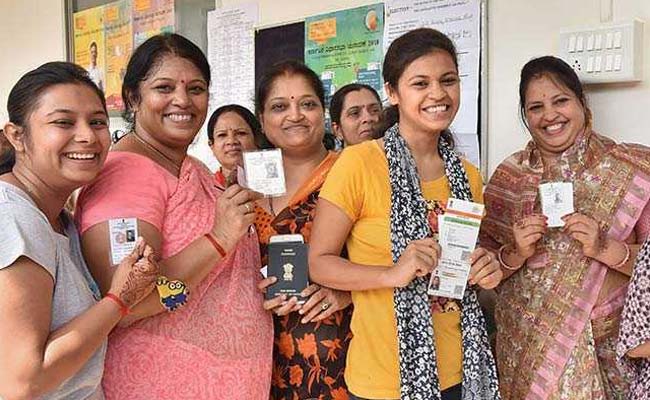