Karnataka bandh, led by pro-Kannada groups' leader Vatal Nagaraj, has been postponed from April 12 till May 3. 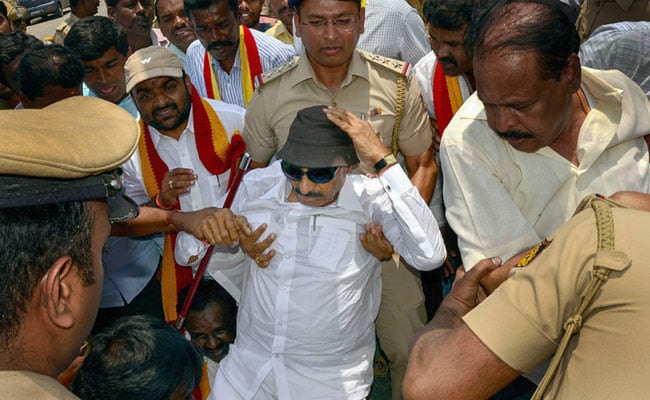 Karnataka bandh called over Cauvery water row by pro-Kannada groups on April 12 has been postponed till May 3, say reports. The shutdown was in a counter to the ongoing stir in neighbouring Tamil Nadu for an early setting up of the Centre to form Cauvery Management Board (CMB). The outfits have urged the Centre to not give into pressure from Tamil Nadu over the formation of Cauvery Management Board as farmer groups across Karnataka are against its formation.  The farmers, however, are against the Karnataka bandh and said that they will look for some other form of protest.

Kurubhara Shantakumar, President of the Karnataka Sugarcane Growers Association had earlier told digital newspaper The News Minute that they did not want Cauvery Management Board since the Supreme Court verdict only mentioned a scheme to divide the water. They welcomed the top court's verdict and said, "We don't support the bandh called by pro-Kannada groups on April 12." Karnataka also does not want the board to be set up as the state would have to give up control over its dams.

"The bandh which was planned for April 12 will not be held. The Central government has remained silent on the issue of Cauvery Management Board and it appears that nothing will happen in this regard till May 3. We will not stop the protest. We will continue it but only after May 3," Kannada Chaluvali Vatal Paksha leader Vatal Nagaraj was quoted as saying by The News Minute.

Vatal Nagaraj, who heads the umbrella of Kannada organisations that have called for the shutdown, also came down heavily on actor-politicians Rajinikanth and Kamal Hassan for supporting the formation of the Cauvery Board.

"We will not let the movies of Rajinikanth and Kamal Hassan to be showed in Karnataka. The two film stars should not come to Karnataka under any circumstances," Vatal Nagaraj was earlier quoted as saying by news agency PTI.

Promoted
Listen to the latest songs, only on JioSaavn.com
Rajinikanth and Kamal Haasan said Karnataka -- which has been given more water at the state's expense by the Supreme Court -- will benefit from it, because in an election season, all parties will seek to appease it.  The state filed a contempt of court petition against the Centre, citing its failure to form the Cauvery Board by March 29.

The distribution of water between the neighbouring southern states has been a contentious issue for decades and has turned into a politically volatile one, as Karnataka votes to pick its next government on May 12. Citing the election, the centre had asked for more time to work out the modalities of water-sharing.