Kangana Ranaut's Manikarnika: Rani Of Jhansi: Ketan Mehta said: "I had approached her in June 2015 regarding this project and she had readily agreed to do it. We also shared the script, certain research material and a lot of discussion had happened" Kangana Ranaut in Varanasi to launch the poster of Manikarnika.

New Delhi: Filmmaker Ketan Mehta has sent a legal notice to actress Kangana Ranaut for allegedly 'hijacking' the script of his film based on Rani Laxmibai, reports news agency IANS. The Manjhi: The Mountain Man director told IANS that he shared the "script and research material" of the film with Kangana in June 2015 and that she gave her consent for the project. But later, the Queen actress retracted and recently announced another film on Rani Laxmibai, titled Manikarnika: Rani Of Jhansi, with producer Kamal Jain. "Yes it is true. We have sent a notice to Kangana as I think there is an attempt of hijacking a film. I had approached her in June 2015 regarding this project and she had readily agreed to do it and enough statements have been made by her showing the commitment about the project," Ketan Mehta said.

"We also shared the script, certain research material and a lot of discussion had happened. After this, suddenly we hear that she is doing a project with some other producer. I find this completely unethical," he told IANS. In March, a source told mid-day that Kangana and Ketan Mehta parted ways "because they couldn't find common ground on the language factor." Ketan Mehta wanted to make the film in English for an international audience while Kangana wanted the film to be in Hindi.

Earlier this month, Kangana Ranaut unveiled the poster of Manikarnika: Rani Of Jhansi in Varanasi, participated in the Ganga aarti at the Dashashwamedh Ghat and even took a dip in the river to seek blessings for her film. Kangana told IANS: "After coming on board to this project I'm feeling like I've achieved something very big in this movie." Talking about the preparation of her film Manikarnika, Kangana said: "The prep is restricted to the material like photographs and letters. I saw a lot of things here. I will be going to Jhansi and other places for research." 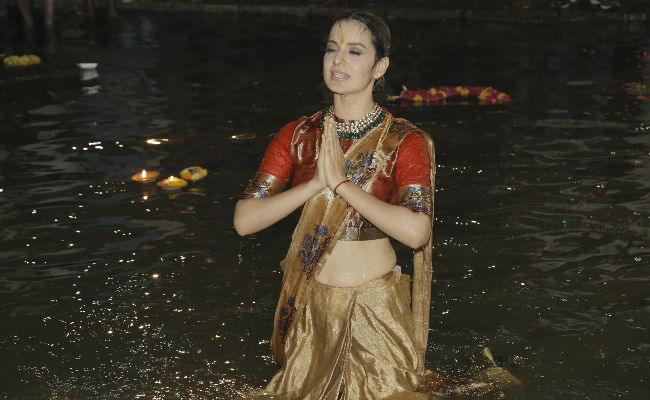 Kangana Ranaut in Varanasi for Manikarnika

K V Vijayendra Prasad, the writer of Baahubali and Bajrangi Bhaijaan, is writing the script of Manikarnika and the film will be directed by Krish. Manikarnika: Rani Of Jhansi is slated for release in April 2018.

Meanwhile, Ketan Mehta told IANS that Kangana Ranaut is yet to respond to the legal notice and added: "This is for the legal lawyer to work it out. We have put 10 years of our life in this project as it's a great project for the world, not just India," reports IANS. Ketan Mehta is the director of films like Mirch Masala, Maya Memsaab and Mangal Pandey - The Rising.

Kangana Ranaut's next film, Simran, is also tackling its own share of controversies after writer Apurva Asrani alleged on social media that the actress has been unfairly credited for 'additional story, screenplay and script.' Simran, directed by Hansal Mehta, is scheduled to release on September 15.

Promoted
Listen to the latest songs, only on JioSaavn.com
Kangana Ranaut was last seen in Vishal Bhardwaj's Rangoon.