BJP Should Give Account Of Their 15 Years Before Asking Me About My 15 Months: Kamal Nath

Talking to reporters in Gwalior, the home turf of Congress-turned-BJP leader Jyotiraditya Scindia, Kamal Nath said, "We don't want a certificate from (Chief Minister) Shivraj Singh Chouhan and the BJP. People are the witness (of our 15-month-rule)." 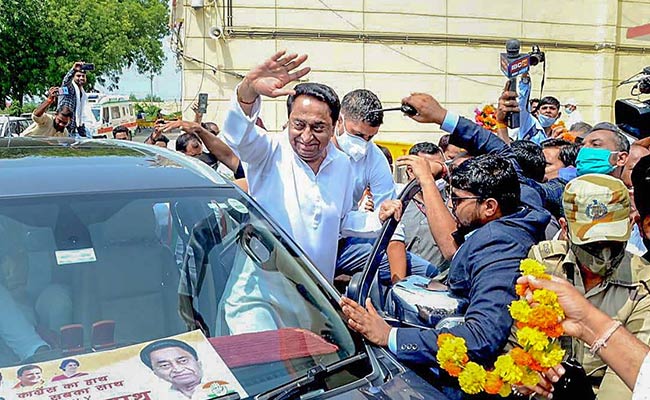 Madhya Pradesh Congress chief Kamal Nath today said the BJP should give account of its 15-year-long rule in the state before asking about the performance of the previous Congress-led government that was in power for 15 months.

Kamal Nath also accused the BJP of coming to power in the state through "notes" (money).

A state BJP leader, however, said the government led by his party was formed through a democratic process.

Talking to reporters in Gwalior, the home turf of Congress-turned-BJP leader Jyotiraditya Scindia, Kamal Nath said, "We don't want a certificate from (Chief Minister) Shivraj Singh Chouhan and the BJP. People are the witness (of our 15-month-rule)."

"How dare the BJP ask for a 15-month account from me? They are not giving account of the BJP's 15 years of rule. They should first give their account," he said.

"We had formed the government through votes, while the BJP did so through notes," he alleged.

Taking a jibe at Jyotiraditya Scindia without naming him, Kamal Nath said, "Madhya Pradesh was known by Gwalior and nobody used to talk about Indore, Bhopal and Jabalpur. Why did the Gwalior-Chambal region remain neglected and who was responsible for that?"

Kamal Nath claimed that farm loans of 26 lakh farmers were waived by his government and said he was ready to give a list of the beneficiaries to Shivraj Singh Chouhan.

Accusing the Madhya Pradesh government of conducting less number of coronavirus tests as compared to other states, and also alleged that Shivraj Chouhan had made false announcements.

"We repeatedly went to people with the account of our government during various assembly and Lok Sabha elections in the past 15 years. The Congress leaders should also do so about their 15-month-long government while seeking votes during (assembly) bypolls," he said.

He said the bank accounts of farmers are showing that their farm loans were not waived by the previous Congress government.

"Why didn't Kamal Nath pay attention towards the development of Gwalior-Chambal region when he was the CM? Previous government stopped the funding for the expansion of hospitals and did not give a nod for Chambal expressway. He was CM for the entire state," Mr Agrawal said.

"The BJP government in the state was formed purely through democratic process and those who resigned from the Congress are going to public again," he said.