While Chief Minister Kamal Nath is a Congress candidate for the Assembly bypoll, his son Nakul Nath is a party nominee for the Lok Sabha elections. 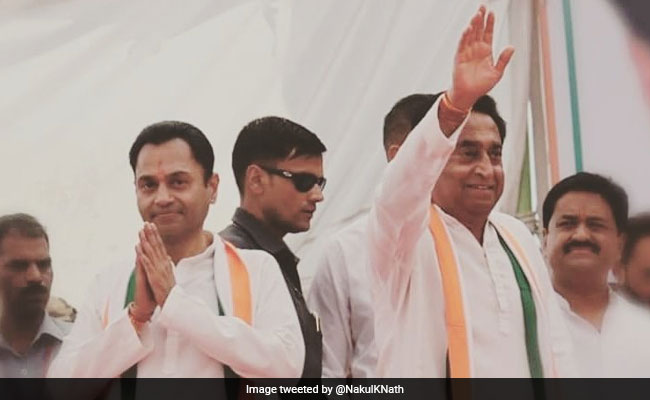 Kamal Nath and Nakul Nath have campaigned together several times in Chhindwara.

Chhindwara in Madhya Pradesh has gained the unique distinction of being the only constituency from where a father and son are contesting the elections.

While Chief Minister Kamal Nath is a Congress candidate for the Assembly bypoll, his son Nakul Nath is a party nominee for the Lok Sabha elections. Both are campaigning together and both are harping on development in their campaigns.

Nakul Nath, who is making his political debut in these elections, has been pitted against BJP's tribal leader and former MLA Nathan Shah Kavreti. He has been promising to continue the development work started by his father in his constituency.

He however, makes no reference of the 'Chhindwara Model of Development', which was the Congress' poll plank in the Assembly elections last November.

"BJP candidate Nathan Shah Kavreti, on the other hand, is constantly referring to the 'Modi Model of Development', perhaps as a counter to the Congress' Assembly poll refrain," says political analyst Manish Gupta.

Chhindwara has been the Nath family turf for 40 years now. Before he became the Chief Minister, Kamal Nath represented the constituency in the Lok Sabha for nine consecutive terms. It was only in the 1997 Parliamentary bypoll that he faced defeat at the hands of former Chief Minister and BJP leader Sundar Lal Patwa.

Following his elevation as the Chief Minister, Kamal Nath has to be elected as an MLA from the state within six months. The Assembly bypoll was necessitated after Congress MLA Deepak Saksena vacated the seat for him.

Mr Gupta admits that Chhindwara has seen development. Locals too agree that Kamal Nath has worked for his home town, but add that there's still room for more.

"Despite the improvement in roads and infrastructure, there's a severe dearth of jobs in the area. The representatives really need to work to get more employment here," said Rajesh Kumar, a youth.

And the BJP is attempting to exploit just that little "room for more" insisting on the Chief Minister's few appearances in the city in election season.

With his presence essential in Bhopal, Kamal Nath is unable to campaign much. But Nakul Nath is making up for his father's absence. He addresses 5-6 rallies and visits at least 15 villages every day.

The constituency votes in the fourth phase on April 29. There are nine candidates in the fray for the Chhindwara Assembly seat.