The Madhya Pradesh floor test has to be videographed and there has to be live telecast of the proceedings, the Supreme Court said. 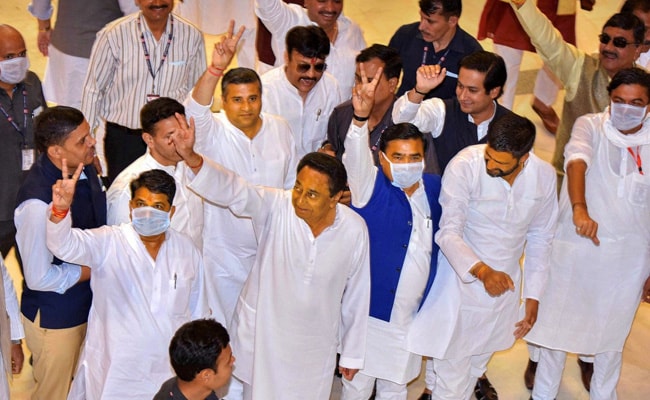 Kamal Nath's government plunged into a crisis with the resignation of 22 Congress MLAs.

The floor test of the Kamal Nath government in Madhya Pradesh will be held at 2 pm on Friday, the assembly secretariat has announced after the Supreme Court set a 5 pm deadline in response to a BJP petition that wanted an immediate resolution of the issue. The Congress government in the state has been on the brink of collapse since last week after 22 MLAs -- loyal to Jyotiraditya Scindia, who quit the Congress and joined the BJP last week, sent in their resignation.

Ordering the session to be reconvened on March 20, the court said, "There will be only one agenda - whether the government enjoys strength. The state of uncertainty in Madhya Pradesh should be effectively resolved by a floor test".

The Chief Minister, whose government had a wafer-thin majority, has been insisting that he has the numbers. But the 10-day adjournment of the assembly, which reconvened on Monday for the budget session, prompted the BJP to take the case to the Supreme Court.

The BJP has contended that the government was delaying the trust vote in the name of coronavirus.

The court, which remarked that a long time frame before a trust vote leaves room for "horse-trading", named a date this evening after hearing the case for two days.

"The voting has to be done peacefully, by a show of hands. It has to be videographed and there has to be live telecast of the proceedings," the judges said.

Regarding the Congress contention that the 16 rebel MLAs - who the party alleges have been "kidnapped and kept captive" by the BJP - the court said if any of the MLAs wish to be present for the voting, security should be provided.

The rebel MLAs, who were also represented in court, insisted that they has resigned of their "free will" - a point they also made in a number of videos released on Wednesday.

The Congress and the BJP had locked horns in court on Monday - following power struggle in the state that has been going on for weeks. Dushyant Dave, who appeared for the Congress, had hit out at Governor Lalji Tandon, who had asked the Speaker for a floor test. Calling the Governor's action "unconstitutional," he had acused him of constitutional impropriety.

On Thursday, the court said the Governor was right in stepping in when the assembly was adjourned.

Congress leader PL Punia asserted that the Congress will be able to show the numbers and continue its government in the state. Senior party leader Adhir Ranjan Choudhury told NDTV, "Whoever has the numbers will win".

Last week, with the Speaker's acceptance of the resignations of six ministers among the 22 rebel MLAs, following the Chief Minister's letter to the Governor, the Congress numbers have come down to 108. The party has the support of seven allied legislators.

Making the collapse of the government in Madhya Pradesh all but certain, state assembly speaker Narmada Prasad Prajapati late Thursday night accepted the resignations of the remaining 16 rebel Congress MLAs who have been in Bengaluru since March 9.

With this, the resignations of all 22 MLAs in former Congress leader Jyotiraditya Scindia's camp who resigned on March 10 now stand accepted - bringing down the total strength of the assembly to 206 where the ruling Congress with 92 members and seven allied MLAs is now at least five short of a simple majority of 104. The opposition BJP with 107 MLAs is three more than the simple majority.