In the poster, Arun Jaitely's is surrounded by bouquet and flowers, particularly lotus which is also BJP party's symbol. "Tribute to much-respected minister and attorney...," the tweet read. 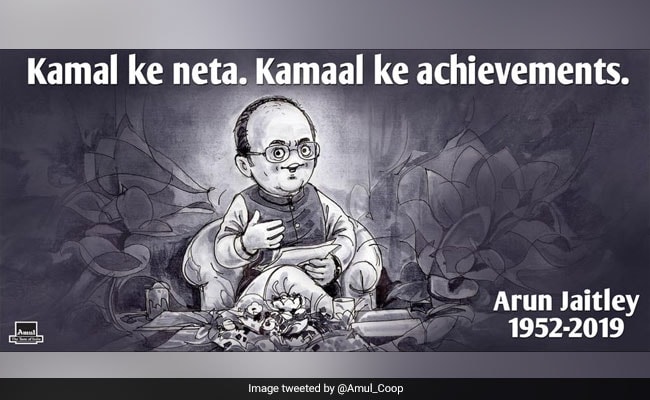 In the poster, Arun Jaitely is surrounded by bouquet and flowers, particularly lotus which is also BJP party's symbol. "Tribute to much-respected minister and attorney...," the tweet read.

Arun Jaitley was cremated with state honours at Nigambodh Ghat on Sunday.

Prime Minister Narendra Modi, who is abroad, missed the funeral. He offered to come back yesterday but was dissuaded by Mr Jaitley's family in view of his engagements. PM Modi is attending the G7 summit in France today after his visit to Bahrain.

Arun Jaitley first became a cabinet minister in the government of former Prime Minister Atal Bihari Vajpayee in 2000. He then also went on to serve as the Leader of the Opposition in the Rajya Sabha from June 2009.

He was appointed the finance minister in the first term of Modi government in 2014. He opted out of the 2019 Lok Sabha elections citing health reasons.

PM Modi - who visited Mr Jaitley at AIIMS before leaving the country - turned emotional after the news of Mr Jaitley's death. "I can't imagine that I am so far here while my friend has gone away.

Some days ago, we lost our former External Affairs Minister behen Sushma ji. Today I have lost my friend Arun," he said.

Sushma Swaraj, one of the most popular ministers in the first term of PM Modi's government, died on August 6. She was the second high-profile loss to the BJP after Manohar Parikkar, the former defence minister, who died in March.