JNU violence: Delhi Police have said groups they have linked to the attack - Left-backed student outfits and BJP-linked ABVP - both took help from outsiders

JNU attack: A mob of around 70 to 100 people attacked JNU students and faculty last week

Delhi Police has identified 37 of 60 members of a WhatsApp group called 'Unity against Left', which authorities believe is linked to last week's mob attack on JNU students and faculty, police sources said today. Around 10 of those identified so far are believed to outsiders - i.e., they are not students of the university - who took part in the brutal and unchecked assault that left 34 people injured. The sources also said groups they have linked to the violence - Left-backed student outfits and BJP-linked ABVP (Akhil Bharatiya Vidyarthi Parishad) - both took help from outsiders. They said JNU students facilitated the entry of these outsiders into the campus.

One of the 37 individuals identified is Manish Jangid, who is Secretary of the ABVP's JNU unit, and has told NDTV that he had no knowledge of being added to the group. "My phone had broken. When I got it repaired then I got to know that I had been added to the group," he claimed.

In photographs shared by news agency ANI, Mr Kumar, who yesterday was called to a meet with the Education Ministry, met around 20 students - none were officials from the student union - and accused "illegal students staying in hostels" may have participated in the violence.

"This is a problem... many illegal students are staying in hostels. They could be outsiders, they maybe participating in any possible violence because they have nothing to do with the university," he said. 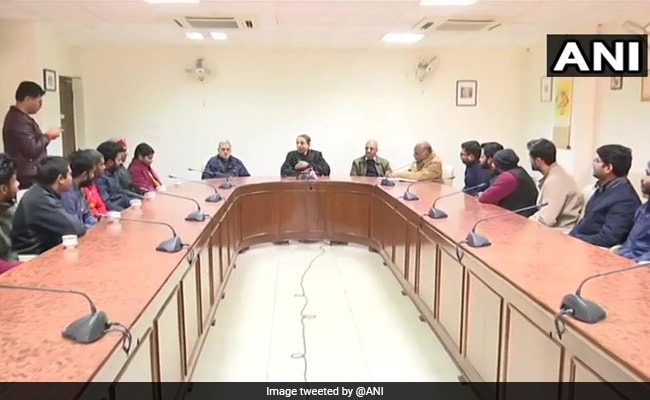 Earlier this week the Vice Chancellor described the January 5 attack as "unfortunate and painful".

Mr Kumar has been heavily criticised for apparent inaction during Sunday's attack and his resignation has been demanded by sections of both students and faculty,

Delhi Police, who have come under fire for their conduct during the attack - students of the prestigious university in Delhi have alleged the cops "did nothing" to stop it - have yet to arrest anyone since violence broke out in the campus on January 5.

On Friday they named JNU students union leader Aishe Ghosh, who was badly wounded in the attack, among nine suspects they said carried out the violence.

Releasing a series of photographs - some of which did not seem to clearly identify the suspects - the cops named Ms Ghosh and others, including Yogendra Bhardwaj and Vikas Patel; both Mr Bhardwaj and Mr Patel are said to be ABVP members.

"No one has been detained (as yet). Notices will be served to all suspects," Joy Tirkey, DCP (Crime Branch), was quoted by news agency PTI yesterday, adding that the suspects will be called in for questioning soon.

The top cop also said the lack of CCTV footage was a major hurdle in identifying suspects. Last week the police said screenshots from social media posts that went viral were also being studied.

The worst violence is believed to have erupted at Sabarmati hostel

Faced with the accusations of vandalism Aishe Ghosh delivered a powerful and emotional riposte, saying: "I was not the one in a mask... I am the one who was affected. I still have my blood-soaked clothes".

Delhi Police had earlier filed two FIRs against Ms Ghosh - both within minutes of each other and both while the student union leader was bleeding from the head and receiving treatment at a Delhi hospital.

Only one FIR has been filed in connection with the violence that took place on Sunday evening and late night, in which around 70 to 100 masked goons stormed onto the JNU campus carrying iron rods, sledgehammers and broken glass bottles.