A section of the BJP feels Nitish Kumar has been drawing a lot of criticism because of his handling of the migrant crisis, which could have a negative effect on the BJP's prospects in Bihar. 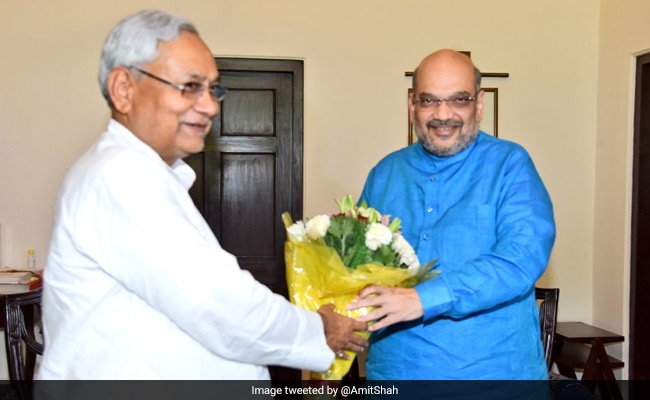 Amit Shah is expected to launch the BJP-led National Democratic Alliance's campaign in Bihar on June 9.

Union minister Amit Shah's virtual rally next week is expected to set to rest all speculation on the BJP's alliance with Nitish Kumar and his position as its face for next year's state election.

Amit Shah is expected to launch the BJP-led National Democratic Alliance's campaign in Bihar on June 9 with a "virtual rally", where will address the people of the state through video conference and Facebook live. The BJP aims to rope in "at least one lakh people across the 243 assembly segments in Bihar" for the video conference.

Sources say Mr Shah is likely to make an important announcement, not only on continuing the alliance with Nitish Kumar's Janata Dal United but also to re-emphasize - as he has done before - that the Bihar Chief Minister will lead the alliance into state polls due next year.

A section of the BJP feels Nitish Kumar has been drawing a lot of criticism because of his handling of the migrant crisis, which could have a negative effect on the BJP's prospects in Bihar.

Insiders said some senior BJP leaders, however, feel that dumping the Chief Minister at this point is not a risk worth taking as he still enjoys popular support in the state.

Nitish Kumar's opponents within the BJP had been vocal before the Lok Sabha elections, unwilling to accept his demand for a 50-50 seat division.

But Amit Shah had not only agreed to an equal distribution, he had also made Mr Kumar the face of the party in the state. The strategy paid off with the alliance sweeping all but one of the state's 40 Lok Sabha seats.

After the election though, Mr Shah has not been so accommodating, turning down the Janata Dal United chief when he sought proportional representation of his party in terms of ministerial berths at the Centre. An upset Nitish Kumar refused to accept the lone ministry offered to his party.

This time, his critics within the BJP have flagged concerns about Mr Kumar's stand on incoming migrants - he has been reluctant about allowing their return to Bihar amid the virus lockdown -- and his government's 1,000-rupee aid for them, alleging that it is just a pittance. Mr Kumar's unwillingness to bring back students from Rajasthan's Kota or elsewhere in the country is unlikely to go down well with voters, they fear.

Mr Kumar had argued that his state does not have the capacity - in terms of medical infrastructure or the funds - to contain a huge spike in infection that was a possibility after the influx of people from outside the state.

In meetings with Prime Minister Narendra Modi, Mr Kumar not only demanded more test kits and PPE kits but also funds to deal with the state's sliding economy.

Announcing this in Patna, Lalu Yadav's son and Leader of the opposition Tejaswi Yadav said a virtual rally just "mocks the poor, who have suffered the most during the lockdown".