Jammu and Kashmir removed from list of 'disputes' under UN 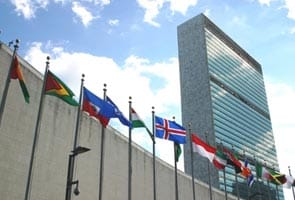 United Nations: In a significant development, Jammu and Kashmir has been removed from the United Nations(UN) list of unresolved disputes, giving a setback to Pakistan which has been asking the world body to intervene on the issue.

The omission of Jammu and Kashmir from a list of disputes under the observation of the UN Security Council was noticed by Pakistan whose envoy has lodged a protest.

"Jammu and Kashmir dispute was not mentioned in the context of unresolved long-running situations," said Amjad Hussain B Sial, Pakistan' acting envoy to the UN.

"We understand this was an inadvertent omission, as Jammu and Kashmir is one of the oldest disputes on agenda of the Security Council," he added.

Pakistan has been asking the UN to intervene to help resolve the issue but India has always maintained that it has to be resolved bilaterally between the two countries.

Speaking earlier at the General Assembly, the UK envoy to the UN, Mark Lyall Grant, said that "some long-running situations, including in the Middle East, Cyprus and Western Sahara remain unresolved, as do issues where the Council has become engaged in recent years, including Nepal and Guinea Bissau."

"Huge challenges remain in Sudan, Somalia and the DRC," he added.

Pakistan repeatedly raises Kashmir as an issue for the UN while India asserts that it is an internal matter.

While expressing concern about the unrest, Secretary- General Ban Ki-moon said that the UN will not intervene until requested by both parties.

"As far as this role of good offices is concerned, the United Nations normally takes that initiative when requested by both parties concerned," Ban said in October.

"India and Pakistan, they are neighbouring countries, important nations in that region - peace and security would have important implications," he added.

At the debate in the General Assembly, the UK also repeated its support to see India on as a permanent member of the Security Council.

"On the Council's structure, we continue to support permanent membership for Brazil, Germany, India and Japan, as well as permanent representation for Africa," said Philip Parham, deputy envoy to UK.

"We look forward to working with many of these countries next year when they join the Security Council," he said, referring to the entry of India and Germany on the Council next year as non-permanent members for a two year term.

While Japan will leave the Council in 2011, Brazil will serve out one more year.

The UK representative also suggested "an intermediate model" of reform, which would create new seats with a longer mandate than the present two year term.

Then, at the end of this period, a review would be done to see whether these seats should be turned into permanent ones.

Promoted
Listen to the latest songs, only on JioSaavn.com
Pakistan, which objects to India being on the Council, argued that the new council should include a few large states, a number of medium sized States and a majority of smaller States.

"We support the position of the Organization of Islamic Conference demanding adequate representation of Muslim Ummah in the Security Council," said Sial.