Shah Rukh Khan's jab Harry Met Sejal will release a week before Akshay Kumar's Toilet - Ek Prem Katha. "My logic has always been that if it (date change) can be done, it's nice," said SRK 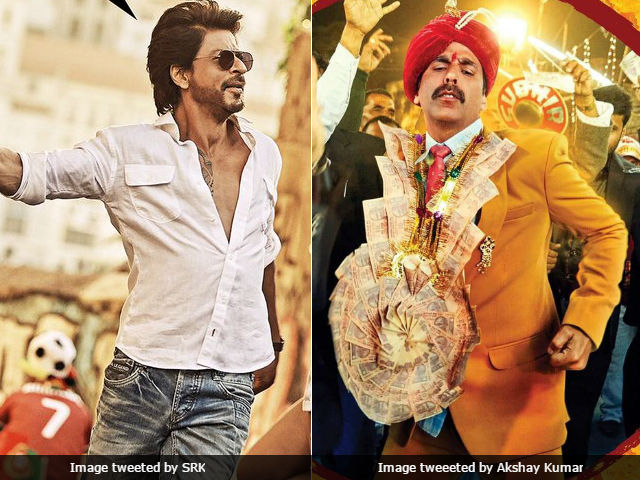 New Delhi: Shah Rukh Khan recently averted a box office clash with actor Akshay Kumar by shift the release date of his film Jab Harry Met Sejal to August 4. The 51-year-old actor told news agency IANS that it's best to avoid clash wherever possible. In January, SRK's Raees released with Hrithik Roshan's Kaabil during the Republic Day weekend. Raees outperformed Kaabil which did decent business too. "I think whenever you can, it's nicer for both films. If you can't, then you have to release on the same date because when you are looking for alternate dates so that two films don't come on the same day, you request and talk to each other. And mostly what we do on the big ticket films is that since our films are expensive and big, my logic has always been that if it (date change) can be done, it's nice," Shah Rukh Khan told IANS.

"Our films are also capacity films. I think they have the capacity to take on 4,000 screens and fill them up. If we come with another film, unfortunately we don't have the capacity to fill in. So we are running at half capacity. We haven't been able to exploit what our market gives us," Shah Rukh added.

Last year, Shah Rukh's Raaes narrowly avoided a clash with Salman Khan's Sultan (which resulted in the aforementioned clash with Kaabil). Meanwhile, the trailer of Shah Rukh Khan's Jab Harry Met Sejal will be attached to Salman's Tubelight, which will open in theatre on June 23.

Jab Harry Met Sejal is directed by Imtiaz Ali and also stars Anushka Sharma. The title, which was finally disclosed on Friday after much hullabaloo, is homonymical to Hollywood film When Harry Met Sally, but SRK says that both films are unrelated. "It is a throwback to that. The film is not like that at all. When Harry Met Sally is perhaps one of the most revered love-stories. But this (Jab Harry Met Sejal) is an unabashed love story. It is a happy film as the poster suggests. And the character's names are Harinder 'Harry' Singh and Sejal. It is kind of the Punjabi, Gujarati combination," he told IANS.

Promoted
Listen to the latest songs, only on JioSaavn.com
After Jab Harry Met Sejal, Shah Rukh Khan will be seen in Aanand L Rai's film which also stars Anushka Sharma and Katrina Kaif. SRK also has a cameo in Salman's Tubelight.