Ivanka Trump had come to India in November 2017 for the Global Entrepreneurship Summit. She had been invited to India for the summit by PM Narendra Modi during his visit to US earlier that year. 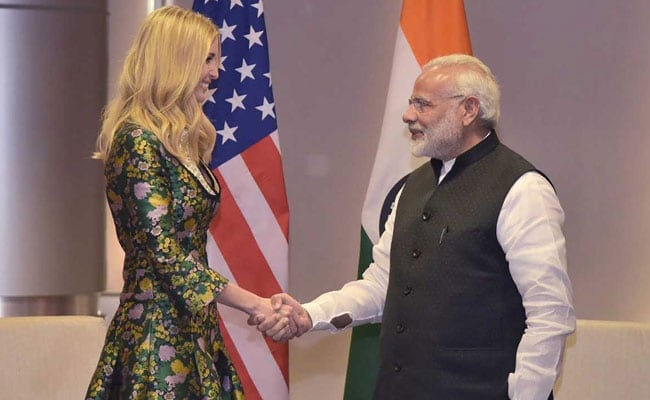 Ivanka Trump had been invited to India for the summit by PM Modi during his visit to US in 2017. (File)

"Congratulations @narendramodi on a great victory! Exciting times ahead for the wonderful people of India," tweeted Ivanka Trump.

Ivanka Trump had come to India in November 2017 for the Global Entrepreneurship Summit. She had been invited to India for the summit by PM Modi during his visit to US earlier that year.

During her visit, she had applauded PM Modi for the bringing a promise of "transformational change" to Indians. She had even made mention of the prime minister's "humble beginnings" as a tea-seller.

"From your childhood selling tea to your election as India's Prime Minister, you've proven that transformational change is possible. And now you are bringing that promise to hundreds of millions of people across your country," Ms Trump had said.

Last night, after PM Modi's victory speech at the BJP headquarters in New Delhi, Donald Trump had tweeted: "Congratulations to Prime Minister @NarendraModi and his BJP party on their BIG election victory!"

The two leaders have shared a warm rapport since President Trump election in November 2016.  Trade tensions, however, have been simmering between the two countries. Last year, Mr Trump targeted India over allegedly unfair trade practices, particularly tariffs on imports of US-made Harley-Davidson motorcycles.

Several other world leaders conveyed their best wishes to PM Modi on securing a second term in office, including Chinese President Xi Jinping and Pakistani Prime Minster Imran Khan. The national election was held in seven phases from April 11 to May 19. Election results showed a resounding victory for the BJP, with an even bigger mandate than in 2014. The election victory made Mr Modi the first prime minister in 48 years to return to power with a majority.