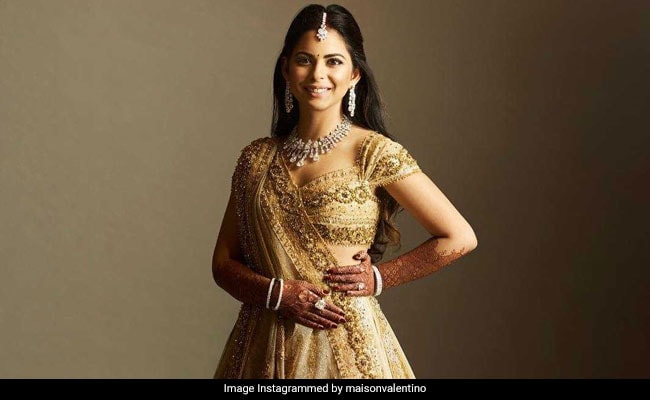 Isha Ambani at her wedding reception in Mumbai, wearing a lehenga by designer Valentino.

From food and guests to decor and venue, Isha Ambani and Anand Piramal's marriage festivities arguably surpassed all other big fat Indian weddings in scale and extravagance this year.

Even wedding outfits managed to stand out amid so much grandeur during the celebrations.

However, it was Isha Ambani's golden lehenga at the second reception in Mumbai last week which caught our eye among everything else.

Custom-made by Italian designer Maison Valentino, a first of its kind, the floral lehenga was enriched with intricate gold embroideries and a heavily embroidered blouse. She draped the ensemble with a zari embroidered dupatta.

The customised lehenga was accessorised with diamond jewellery and white chudas. 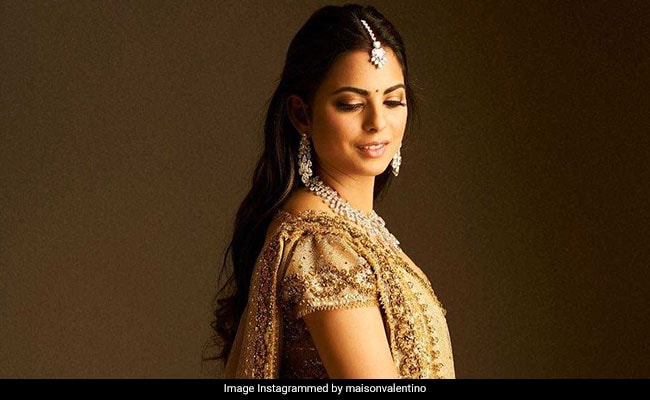 Isha Ambani, daughter of India's richest man Mukesh Ambani and Nita Ambani, and Anand Piramal got married on December 12 at Anitilia, the Ambani residence, in Mumbai.

The two families had hosted lavish pre-wedding celebrations in Udaipur, the highlight of which was American pop sensation Beyonce's 45-minute long performance.

For the evening of her pre-wedding in Udaipur, Ms Ambani wore a fully embroidered silver evening gown designed exclusively for her by Maison Valentino. 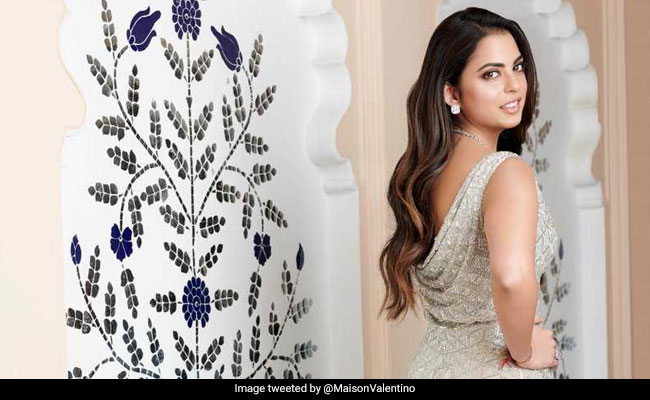 At her pre-wedding function in Udaipur, Isha Ambani wears a dress by Valentino.

The wedding at Anitilia was followed by two receptions -- one at newlyweds Isha Ambani and Anand Piramal's new home, Gulita, in Mumbai, and another one at Jio Gardens in Mumbai.

Gold has been a favoured colour for Isha Ambani throughout her wedding ceremonies. She stunned as a radiant bride in an Abu Jani-Sandeep Khosla lehenga on the day of her wedding.

Anand Piramal is the son of Ajay Piramal, the chairman of the Piramal Group of companies, whose interests range from pharmaceuticals to financial services and real estate financing. The Ambanis and Piramals, two of India's most influential families have known each other for over 40 years