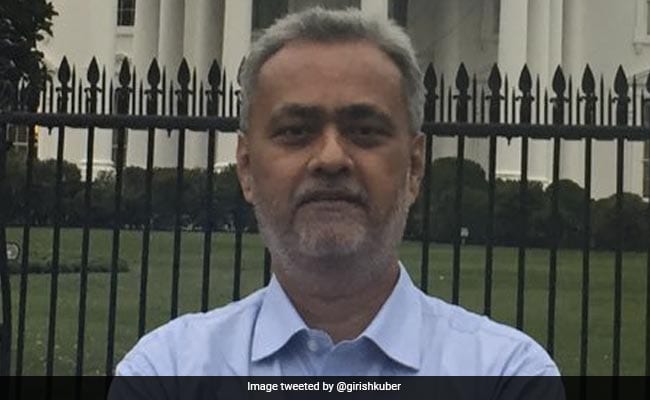 Girish Kuber is the editor of Marathi daily Loksatta (File)

Suspected activists of a Maratha group - Sambhaji Brigade - today threw ink at senior journalist and writer Girish Kuber at a literary meet in Maharashtra's Nashik. The group was irked by certain references Mr Kuber has made about Chhatrapati Sambhaji Maharaj, the son of Chhatrapati Shivaji Maharaj, in his book, sources said. Security has been stepped up in the area following the incident.

Girish Kuber, the editor of Marathi daily Loksatta, had reached Nashik's Kusumagraj Nagri on the concluding day of the 94th Akhil Bharatiya Marathi Sahitya Sammelan earlier today where he was scheduled to attend a symposium.

As he stood behind the stage, two-three unidentified men walked up to him and threw ink at him that fell on his face, hair, and shirt. Some of the ink fell on police personnel present at the spot.

The attack has been condemned by leaders across party lines, including Sharad Pawar and former Chief Minister Devendra Fadnavis.

Shard Pawar, who had visited the venue of the literary meet earlier today, said the attack on a writer in protest against his work is akin to the attack on the principle of the freedom of expression.

“I condemn this incident which doesn't suit the image of Maharashtra,” he said, adding that he has read Girish Kuber's book.

“Though there is a controversy over some portions of this book, at the same time, Girish Kuber has the right to express himself. Those who disagree with his views also have the right to oppose him but such attack is not acceptable,” he added.

Devendra Fadnavis, the Leader of Opposition in the Maharashtra Assembly, said anything written against Chhatrapati Sambhaji Maharaj should be condemned but restoring to an ink attack during a literary meet is not right.

“If something is factually wrong, it should be countered with facts and evidence,” he said.

Girish Kuber's book “Renaissance State: The Unwritten Story of the Making of Maharashtra” has been criticised by the Sambhaji Brigade over “objectionable references” to Chhatrapati Sambhaji.