India's Vaccine Diplomacy In South Asia Pushes Back Against China

Free shipments of AstraZeneca's vaccine manufactured by the Serum Institute of India, the world's biggest producer of vaccines, have begun arriving in the Maldives, Bhutan, Bangladesh and Nepal. 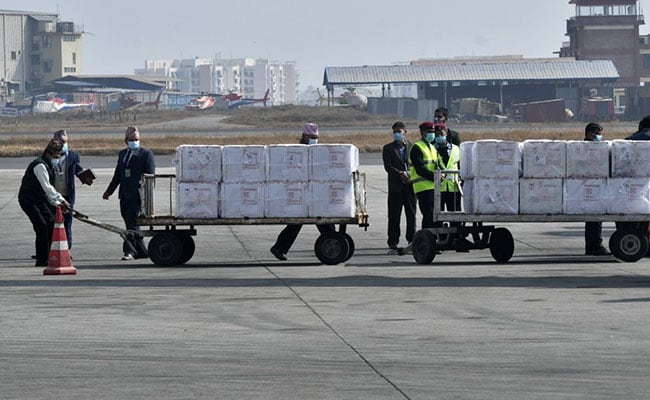 Myanmar and the Seychelles are next in line to get free consignments from India.

India will give millions of doses of COVID-19 vaccine to South Asian countries in the next few weeks, government sources told news agency Reuters today, drawing praise from its neighbours and pushing back against China's dominating presence in the region.

Free shipments of AstraZeneca's vaccine manufactured by the Serum Institute of India, the world's biggest producer of vaccines, have begun arriving in the Maldives, Bhutan, Bangladesh and Nepal.

Myanmar and the Seychelles are next in line to get free consignments as India uses its strength as one of the world's biggest makers of generic drugs to build friendships.

"The government of India has shown goodwill by providing the vaccine in grant. This is at the people's level, it is the public who are suffering the most from COVID-19," said Nepal's Minister for Health and Population Hridayesh Tripathi.

The gesture comes at a time that India's ties with Nepal have been strained by a territorial dispute and concern over China's expanding political and economic influence in Nepal.

China, which had promised Nepal help to deal with the pandemic, is awaiting Nepali clearance for its Sinopharm shots.

"We've asked them to submit more documents and information before we give them the approval," said Santosh KC, spokesman for Nepal's department of drug administration.

Bangladesh was supposed to get 110,000 doses of vaccine free from Chinese firm Sinovac Biotech, but Bangladesh refused to contribute towards the development cost of the vaccine leading to deadlock.

Bangladesh has instead turned to India for urgent supplies and is due to receive 2 million shots of the AstraZeneca vaccine as a gift from India today.

"India is making the AstraZeneca vaccine which makes all the difference. It can be stored and transported at normal refrigerated temperatures and countries like Bangladesh have that facility," a Bangladesh health official said.

Meanwhile, Pakistan today thanked China for a pledge to provide half a million doses of the vaccine free of charge by the end of the month.

India for years has struggled to match the pace of Chinese investment in countries such as Sri Lanka, Nepal and the Maldives, where China is building ports, roads and power stations as part of its Belt and Road Initiative. But the demand for vaccines in these countries desperate to revive their tourism-dependent economies has offered Prime Minister Narendra Modi's government a way to claw back ground, diplomats say.

India is considering giving away anything from 12 million to 20 million shots to its neighbours in the first wave of assistance over the next three to four weeks, one government source said.

India is also helping with the training of health workers in some of these countries and the setting up of the infrastructure to administer the shots, the source said.

"It's a well-crafted, calibrated series of actions you are seeing, they confirm the validity of our 'neighbourhood first' policy," said former Indian ambassador Rajiv Bhatia. "It plays to our strengths in science and pharma, and this is our moment to shine."