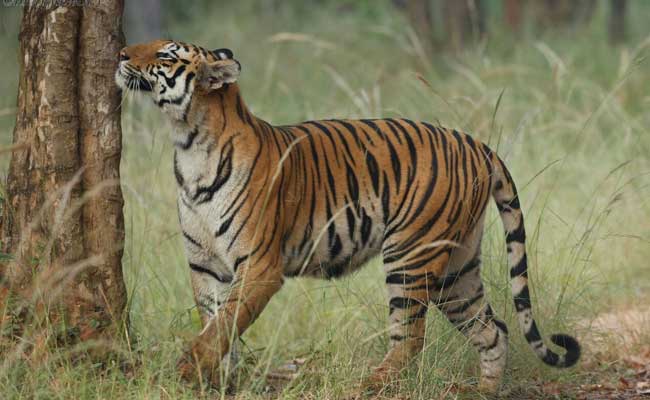 India has the maximum number of tigers amongst the 13 Tiger Range Countries in the world.

New Delhi: Union Environment Minister Anil Madhav Dave on friday expressed hope that India, home to 70 per cent of world's tiger population, would be able to double the number of wild cats by 2022 through "conservation and care".

"India has 2,226 tigers spread out in over 17 states and 49 sanctuaries across the country," Mr Dave said.

"A healthy tiger is a symbol of healthy environment," he said on the International Tiger Day.

In an official statement, Mr Dave expressed hope that India will be able to double the population of tigers by 2022 by "conserving and caring for them."

He emphasised that India is contributing significantly towards achieving the St Petersburg target, commonly referred to as the global wildlife conservation goal 'TX2', which aims to double tiger numbers in the next six years.

Although India has the maximum number of tigers amongst the 13 Tiger Range Countries (TRC) in the world, the status of the wild cats across the TRCs continues to remain endangered.

Though there have been some gains in the population build-up in some TRCs like India, Nepal, Bhutan and Russia, the global scenario is a "major cause for concern", the statement said.

Mr Dave exhorted tourists from across the world to come to India to see the wild cats and administered a pledge to students for tiger conservation after which he flagged off the 'Walk for Tiger' campaign.

Tigers have become extinct in some TRCs and the status of prey, as well as the habitat, has declined, it said.

The heads of governments of TRCs, have resolved to strive to double the number of wild tigers (TX2) by 2022 and adopted the St Petersburg Resolution on Tiger Conservation.