The app's popularity comes amid calls for a boycott of Chinese mobile apps in India as a border dispute fuels a backlash against products from China. 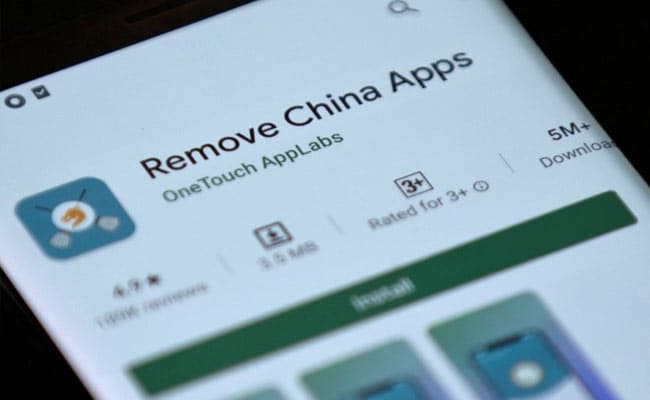 India's top trending free app on Google's mobile app store, with more than 5 million downloads since late May, is called "Remove China Apps" and does exactly what it says on the label.

Its popularity comes amid calls for a boycott of Chinese mobile apps in India as a border dispute fuels a backlash against products from China.

Yoga guru Baba Ramdev posted a video on Twitter on Sunday showing the step-by-step deletion of several Chinese apps, a move he described as a "national service".

Chinese companies have faced occasional opposition for years in India, where some supporters of the Bharatiya Janata Party (BJP) advocate self reliance.

Remove China Apps, whose logo contains a dragon's head with two brooms, scans a user's phone for apps such as ByteDance's TikTok and Alibaba's UC Browser. Once deleted, a message pops up saying, "You are awesome, no China app found."

OneTouch AppLabs, which has developed the app to remove Chinese ones, did not respond to a request for comment. The company, based in Jaipur, describes the app as its first initiative toward a "self reliant India".

ByteDance and Alibaba did not respond to Reuters requests for comment on the app. The Chinese Embassy in New Delhi did not immediately respond.

The protest against Chinese apps comes after India in April said stricter screening rules will apply to foreign direct investments from China, worrying investors there. China has said the policy is discriminatory.

"Previous boycott calls have focused on Chinese goods, whereas this one especially targets Chinese apps, which could impact Chinese technology companies who have seen India as a crucial market," said Tanvi Madan, a senior fellow at the Brookings Institution who closely tracks Indo-China relations.

The stakes are high for firms like ByteDance, which plans to invest $1 billion in India and has recently ramped up hiring.

India, which has a population of 1.3 billion, is the biggest driver of installations of ByteDance's TikTok, which Bollywood actor Milind Soman said last week on Twitter that he was no longer using.

Nupur Sharma, a spokeswoman for the BJP, said it was "great to see concerned citizens setting an example".

"We ought to hit them where it hurts most," Ms Sharma said on Twitter, using the hashtag, #BoycottChineseProducts.

A senior executive working for a China-based company in India, who spoke on condition of anonymity, said Chinese firms were contributing to the Indian economy, especially the manufacturing sector.

He predicted the protests will be short-lived: "It hurts but (the boycott calls) are going to fade."