Gatimaan Express will cover the 200 km distance between Delhi and Agra in 100 minutes. (Press Trust of India photo)

New Delhi: Covered in tricolor balloons and marigold, India's fastest train "Gatimaan Express" today made its debut run from Delhi to the Taj Mahal city of Agra in 100 minutes.

While it did score a record, the train was just seven minutes faster than the Shatabdi Express, on the same route.

Its top speed of 160 km an hour is half that of trains in China, Japan, France and other countries.

Railways Minister Suresh Prabhu said the Gatimaan Express with "train-hostesses" and an entertainment system  brings in "a new era of high-speed rail travel". 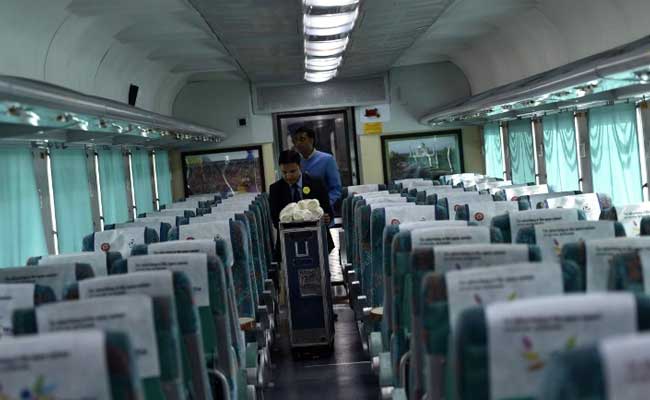 Described by the government as India's first "semi high-speed train", Gatimaan is part of Prime Minister Narendra Modi's plan to overhaul one of the world's oldest rail networks over five years.

Passengers were this morning welcomed with roses by the hostesses as they boarded the gleaming royal blue-and-grey train at the Nizamuddin Railway station in south Delhi.

A train ride costs Rs 750 or 1,500 depending on whether one is traveling in the two "executive class" coaches or in the AC chair car coaches.

The Gatimaan will run six days a week, except on Fridays when the Taj Mahal is shut.

The government's promise of a great ride was tested today when passengers like Ravi complained that the plug points weren't working and there was no Wifi.

But still others had good feedback. "Reaching 160 km is a great achievement for Indian railways. Hope they can keep up with it," says Ashwin, a law student who took the day off to try the executive coach experience.

Most trains in India average speeds of around 110 km an hour.