Delhi hopes to export made-in-India military technology, including its BrahMos missiles, to smaller countries in Asia that fear China's rise. India will have another chance to show off at the Singapore air show starting February 6, where BrahMos Aerospace, a joint venture between India and Russia, will exhibit for the first time. 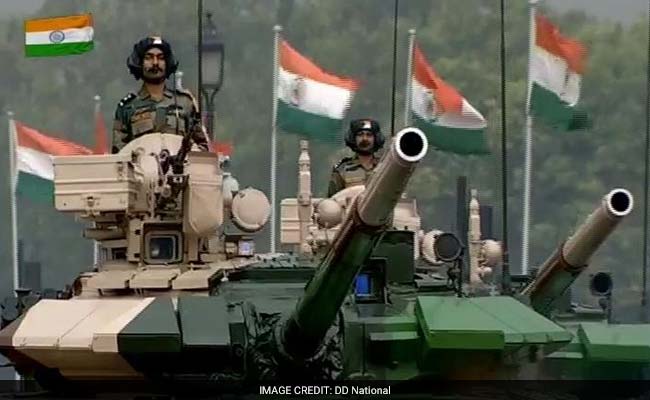 India celebrated its Republic Day by parading troops and locally made weapons in front of New Delhi's colonial-era sandstone buildings and past 10 Southeast Asian heads of state -- all potential buyers.

Delhi hopes to export made-in-India military technology, including its BrahMos missiles, to smaller countries in Asia that fear China's rise. India will have another chance to show off at the Singapore air show starting February 6, where BrahMos Aerospace, a joint venture between India and Russia, will exhibit for the first time.

But away from the pageantry of parades and sales pitches, experts suggest India's $250-billion military modernization program is sputtering. That's becoming more important as the U.S. pressures Delhi to tackle a larger role policing the Indo-Pacific, from the Indian Ocean to the waters off Southeast and East Asia.

While Prime Minister Narendra Modi has held steady against geopolitical rivals, including with China in the face-off at Doklam last year, his administration hasn't fixed a broken defense procurement system in the world's largest arms importer. That prevents it from equipping its own armed forces, let alone those in friendly nations.

"The structures that are dysfunctional, that have stopped the military from making smart choices, are still there," said Ashley Tellis, a senior fellow at the Carnegie Endowment for International Peace who has advised U.S. ambassadors to India. "It's not the way to run a military of a major power. It has to be among the worst procurement processes of any major power."

By contrast, China's military modernization has advanced considerably. Over the past two years, President Xi Jinping has overseen the most sweeping changes to China's military since the 1950s in an effort to create a fighting force that can win modern wars. It's also now the world's third-largest arms exporter, according to the Stockholm International Peace Research Institute.

A spokesman for PM Modi didn't respond to calls or texts for comment on India's defense procurement.

India wants to transition from an importer of weapons systems to an exporter, Ajay Kumar, the government's secretary of defense production, said at a recent panel discussion. India still needs to import most of its components, Mr Kumar said. The BrahMos missile, for instance, is made up of 65 percent imported components.

"There is significant demand from friendly countries who look toward India for meeting their own requirements," he said, without elaborating.

PM Modi's government wants to build up its defense industry through its "Make in India" program, hoping to create jobs and cut huge import bills. But India often prioritizes price, awarding contracts to state-owned defense firms that invest little in research and development, over-promise to score contracts and abandon many projects halfway, according to a report from Delhi's Institute for Defence Studies and Analyses.

Defense suppliers often compensate for the cost of delays and mandatory investments by inflating the final price, according to one US official who previously worked on Indian procurement issues, who asked not to be named, citing rules for speaking with the media.

Last year, the Indian Army rejected an Indian-made rifle for the second year in a row after it reportedly failed quality tests. Locally made products like Arjun tanks, light combat aircraft and even bullet-proof jackets often can't be used on the sensitive China or Pakistan borders because of performance issues.

Part of the problem is procurement is overseen by "non-expert" generalists of the Indian Administrative Service, said Manoj Joshi, a fellow at the Observer Research Foundation think-tank who was on a government task force recommending national security reforms.

"They can't tell you about strategy," he said. "The army, navy and air force are well trained, but their organization is obsolete and their equipment is obsolete."

After three decades spent developing its own fighter, India put out a tender for 126 warplanes, which morphed into an order for 36 Rafale aircraft from Dassault Aviation SA that will start arriving in 2019.

Until then, India's air force is heavily reliant on Soviet-era MiG-21s that fall from the sky so often some call them "Flying Coffins." They also have a fleet of newer Russian Sukhoi SU-30MKIs assembled by state-owned Hindustan Aeronautics Ltd. that was temporarily grounded after one jet ejected its pilots without warning.

Promoted
Listen to the latest songs, only on JioSaavn.com
Experts suggest India could resolve some issues by appointing a single person in charge of the armed forces, or outline priorities in a national security doctrine.

"One of the bigger problems is the lack of overarching political direction in terms of how to prepare and what to prepare for," said Anit Mukherjee, a former Indian army major now at Singapore's S. Rajaratnam School of International Studies. "The army is saying, 'Hey we need to prepare for a ground war,' and the Navy is saying, 'No, no, no. It's the Indian Ocean.' "