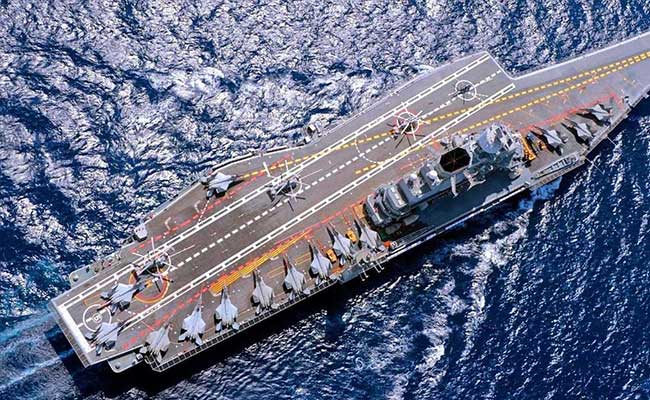 Indian Navy is planning to get a third aircraft carrier, but is awaiting the government's decision

The Indian Navy is keen to acquire a third aircraft carrier, but the government has to take a decision on it, Admiral Karambir Singh said on Friday. The Chief of Naval Staff also said the Indian Ocean Region is facing a slew of challenges.

Admiral Singh was talking to reporters on the sidelines of the ongoing 'Goa Maritime Conclave' in Panaji. The three-day meet, an initiative of the Indian Navy, is aimed at identifying common maritime priorities of littoral nations in the Indian Ocean Region (IOR).

Ten countries, located in India's close and extended neighbourhood, are taking part in the conclave.

"We are very much looking forward for the government to take a decision on third aircraft carrier. The procedure for that is yet to start, the Indian Navy chief said.

The conclave, which opened on Thursday, will culminate on Saturday. National Security Advisor Ajit Doval was the chief guest for the conclave on Friday.

Speaking about the conclave, held once in two years, Admiral Singh said its allows the chiefs of navies from participating countries to get together and see what are the common challenges and find regional solutions.

The chiefs of navies of ten countries - Sri Lanka, the Maldives, Bangladesh, Myanmar, Thailand, Indonesia, Mauritius, Seychelles, Singapore and Malaysia are participating in the conclave.

"For us it was a great occasion because the National Security Advisor was the chief guest that shows how much interest the Government of India is taking in maritime avenues, he said.

"Though SAGAR, an initiative of Prime Minister Narendra Modi in the Indian Ocean Region, India wants to take up challenges and work for prosperity of the region, Admiral Singh said.

"The region has been denied prosperity for many years. We want to find out quick solution at operational level. We are more interested in the outcome, he added.

Admiral Singh said the region is facing challenges in the form of piracy, drug trafficking, human trafficking and even disasters that take place due to climate change.

"So, when they evolve with time you have to change measures and procedures so that you are able to combat them," he added.

Countries like the Maldives are vulnerable to climate change. They are very much part of this issue. They are keen that we operate together, he said, adding "We are also looking at standard operating procedure so that if any disaster takes place all the navies of neighbouring countries can come together, they know how to operate together and pull the resources to help them out."

Speaking about newer challenges, Admiral Singh said climate change is going to have an impact on the region. "A very large population is living in the coast. That is one area that is changing, he said.