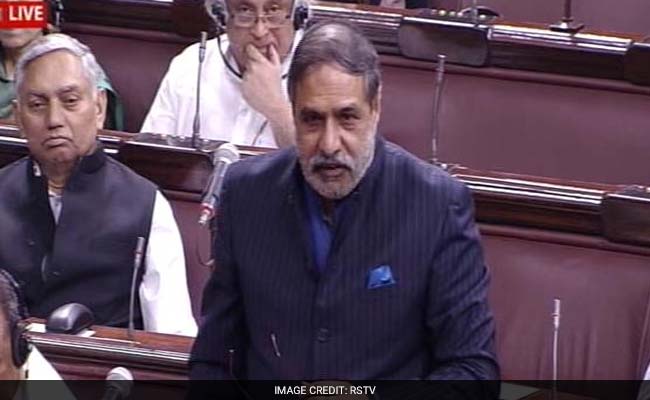 The fiscal deficit is not 3.3 per cent but beyond 8 per cent: Anand Sharma

A day after government data revealed that factory output shrank by 1.1 per cent in August, the Congress on Saturday hit out at the government over economic slowdown and claimed that fiscal deficit is not at 3.3 per cent but beyond 8 per cent.

"Our sympathies are with the country that we have a finance minister who is clueless and does not understand the ''e'' of economy or the ''f'' of finance. Instead of addressing the grim situation confronting the Indian economy, she is blatantly allowing either patronage, promotion of crony-capitalism, huge tax cuts to richest people, no relief to poor," Mr Sharma said while addressing a press conference at the party office.

Referring to the Index of Industrial Production (IIP) data released by government on Friday, according to which the factory output had declined by 1.1 per cent to 4.8 per cent in August last year, the lowest in last seven years, he said the production in the country has crashed, demand has collapsed and huge number of lay-offs and retrenchment are happening.

"Manufacturing has hit a five year low...manufacturing should have been in a positive double digit growth. This country can ill-afford any fall in manufacturing because it is directly related to factory production and job losses. Large numbers of factories are shutting down," Mr Sharma said.

Accusing the government of monumental mismanagement of the Indian economy, the former Commerce and Industry minister claimed, "The fiscal deficit is not 3.3 per cent but beyond 8 per cent. I am referring to the very precarious situation in the Indian economy, which has moved from recession to a crisis mode."

He said the Modi government has failed to deliver despite the fact that the global commodity prices have fallen from 2014 onwards, especially the petroleum prices, which was roughly 7.5 billion dollar per annum, but the government failed to capitalise on it.