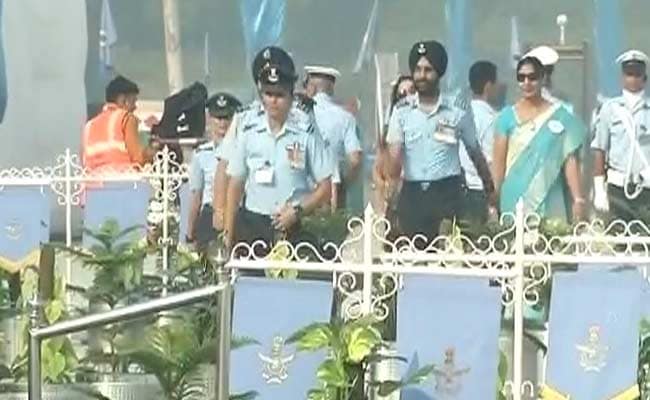 There are 110 women pilots already in the IAF (choppers and transport pilots) which has a higher proportion of women than the other services.

"We have women pilots flying transport aircraft and helicopters, we are now planning to induct them into the fighter stream to meet the aspirations of young women of India," said the air chief on the 83rd Air Force Day.(5 Pics)

"I have no doubt that women will be able to overcome any physical limitations to become fighter pilots," he added.

The proposal has been sent to the defence ministry, but the air chief said it was a matter of time.

Women can enter the fighter stream within one year but it will take three years for them to be trained and taken on board as fighter pilots.

There are around 1,500 women in the Air Force, including 94 pilots and 14 navigators.

In the past, the Air Force had refused to allow women in fighter squadrons because of fears of torture or rape if they were shot down in combat.

The air chief said while women should ultimately be cleared to operate behind enemy lines, a start can be made by assigning them air defence missions over Indian skies.

If the Air Force does make a historic leap, it will be the first to have women in active front-line combat.

In 2010, women in the army and the Air Force were allowed full term service by the Delhi High Court, which commented that women officers "deserve better from the government."

Last month, women naval officers also scored this milestone, with the High Court saying it would "frown upon any endeavor to block progress of women."

Till five years ago, women military officers were entitled only to a limited service span.

Women officers are not allowed on board warships but the navy too, may have to review its rules.

Women serve in the administrative, medical and education branches. They are also taken on aircraft as "observers", to monitor censors.