One of the IL-76 brought empty oxygen cylinders from Singapore to Delhi which is facing an acute shortage of medical oxygen amidst another wave of coronavirus. 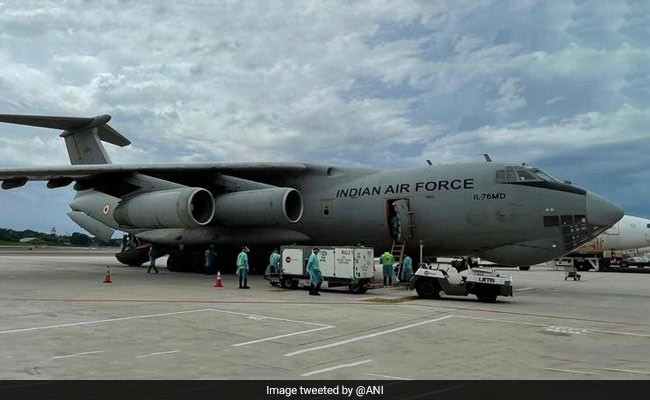 One of the IL-76 being used to bring empty oxygen cylinders from Singapore.

Mighty transporters IL-76 of the Indian Air Force (IAF) brought 352 empty cylinders and cryo-containers from Singapore and Bangkok respectively on Wednesday to combat oxygen crunch in the country, officials said.

One of the IL-76 brought empty oxygen cylinders from Singapore to Delhi which is facing an acute shortage of medical oxygen amidst another wave of coronavirus.

"The IL-76 is picking up 352 empty oxygen cylinders for Delhi. This Union Home Ministry coordinated exercise will help in increasing oxygen availability amid the current COVID-19," a Home Ministry spokesperson said on Wednesday.

Another one transported three cryo-cylinders from Bangkok to its Panagarh base in West Bengal, he said.

Pictures of IL-76s picking up empty cylinders and cryo-containers was also issued by the Press Information Bureau.

This wave of coronavirus has claimed 17,752 lives so far in the national capital.

Meanwhile, the Supreme Court on Wednesday heard centre's appeal against Delhi High Court's order of issuing contempt notice and seeking personal appearance of its officials for non-compliance with the directions on supply of 700 MT oxygen daily to treat COVID-19 patients in the national capital.

The top court stayed contempt proceedings against central government officials saying putting officers in jail would not bring oxygen and efforts should be made to save lives.

A bench headed by Justice D Y Chandrachud said that it had ordered supply of 700 MT oxygen to Delhi daily from May 3 as the pandemic in Delhi was at a very critical stage.

"Tell us how much oxygen you have allocated to Delhi in the last three days," the bench said.

Overstretched health infrastructure is gasping for breath because of an acute shortage of medical oxygen in the city after serious COVID-19 cases started flooding the hospitals.

Several hospitals approached the Delhi High Court and made SOS pleas on social media, saying their oxygen supplies were running out.

On Tuesday, the Delhi High Court asked the centre to show cause why contempt should not be initiated against it for failing to comply with order on supply of oxygen to Delhi for treating COVID-19 patients.

The high court noted that the top court has already directed, and now the high court is also saying that the centre will have to supply 700 MT oxygen daily to Delhi right away by whatever means.

"You are part of the city and seeing the situation yourself. No, you don't know. Are you living in ivory towers?" the bench said.

A bench of Justices Vipin Sanghi and Rekha Palli also rejected the centre's submission that Delhi was not entitled to 700 metric tonnes of medical oxygen in light of existing medical infrastructure.

It said the Supreme Court's April 30 detailed order directed the central government to provide 700 MT of oxygen per day to Delhi and not just 490 MT.

"We had told you contempt is the last thing in our mind but it is certainly in our mind and don't drive us to that last point. We mean business now. Enough is enough. Be clear on this. We are not going to take no for an answer. There is no way you won't supply 700 MT," the high court said during a five-hour long hearing.

"There is a Supreme Court order and now we are also saying that you will have to supply 700 MT oxygen daily to Delhi right away by whatever means. We would not hear anything except compliance", an annoyed bench orally observed.