US Defence Secretary Mattis welcomed his counterpart Nirmala Sitharaman to the Pentagon on Monday for the fourth set of talks the two defense leaders have held this year. 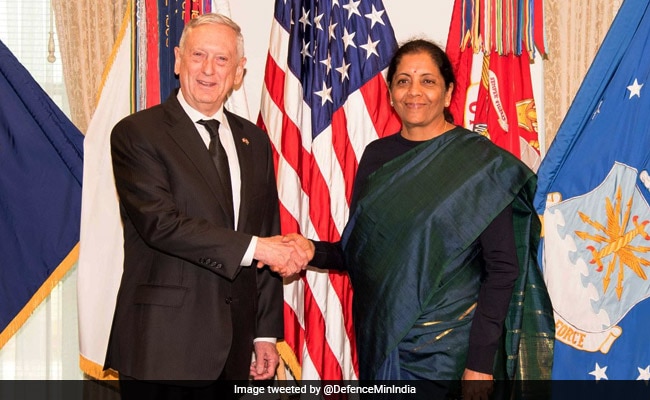 India and the US have agreed to accelerate defence and security ties as Defence Minister Nirmala Sitharaman met her American counterpart  James Mattis, who described India as a "stabilising force" across the Indo-Pacific and the globe.

US Defence Secretary Mattis welcomed Ms Sitharaman to the Pentagon on Monday for the fourth set of talks the two defense leaders have held this year.

Ms Sitharaman, the first woman defence minister of India, is currently on a five-day maiden trip to the US. From Washington, she will travel to California to visit the Defense Innovation Unit of the Department of Defense and the Indo-Pacific Command headquarters in Hawaii.

"The United States and India, in Prime Minister (Narendra) Modi's words, have overcome hesitations of history, carrying forward the legacy of friendship and making clear there is no contradiction between strategic autonomy and strategic partnership," Mr Mattis said.

Ms Sitharaman started her official visit in Washington by visiting the Foggy Bottom headquarters of the State Department, where she signed on the condolence book of former US President George HW Bush who died late Friday at his home in Houston.

From there, she drove to the Arlington National Cemetery where she laid a wreath at the Tomb of the Unknown Soldier, a gesture which did not go unnoticed at the Pentagon.

"On behalf of our department and all of our service members, thank you for paying your nation's respect at Arlington National Cemetery this morning. We're grateful," Mr Mattis said.

Mr Mattis said Ms Sitharaman's presence at the wreath-laying made clear that the US-India military relations were not "defined by brittle or empty words" but by the human aspect of partnership steeped in recognition of the two nations' respective sacrifices and the cause of peace, friendship and freedom.

The two largest democracies of the world, despite diverse histories and cultures, have shared principles, values and respect for the rules-based international order, Mr Mattis said.

"The US-India relationship is a natural partnership between the world's oldest and the world's largest democracy," he said.

While this is her first trip to Washington DC, the two leaders have met four times in about a year, reflecting on the growing defence relationship between India and the United States.

"We have made meaningful progress in advancing US-India defence cooperation, most notably with your nation hosting September's inaugural 2+2 ministerial dialogue in New Delhi," he said.

The ministerial talks served as a tangible demonstration of "our shared vision for a safe, secure, prosperous and free Indo-Pacific, underpinned by respect for the sovereignty and the territorial integrity of all nations," Mr Mattis said.

"Today, I reiterate US appreciation for India's leadership as a stabilising force in pursuit of that vision, promoting peace and security across the region and the globe," he said.

The defence secretary said the 2+2 ministerial dialogue also made clear the commitment of India and the US to further bolster their defence partnership.

"Today, we build on that momentum as we work to implement our agreement from September, Communications Compatibility and Security Agreement (COMCASA)," he added.

During the dialogue, the two nations signed the COMCASA that allows India to receive advanced US military hardware.

Describing the inaugural 2+2 meeting in September as a landmark event, Ms Sitharaman said it set the stage for strategic consultations between the two countries.

The bilateral meetings during the dialogue in New Delhi and other meetings, including the one in Singapore in October, were "indeed positive and productive", she said.

In her remarks at the start of the meeting with Mr Mattis, Ms Sitharaman said the mutual trust and confidence in defence partnership between the two countries was growing.

The defence minister added that she was encouraged by the importance attached to the India-US defence relationship in the new US National Security Strategy.

"A strong foundation has been laid for the India-US defence relationship over the years. India sees the US as an important partner in defence," Ms Sitharaman said, adding that the two countries have good military-to-military cooperation, defence consultations, scientific collaborations and co-production and co-development and industry collaboration.

The recent meetings between the two countries, Ms Sitharaman said, have underscored their mutual desire to move positively.

The high-level exchanges are an indication of the depth and the quality of bilateral ties as well as their mutual desire to work closely on a range of regional and global issues, she added.

Ms Sitharaman appreciated the responsiveness of the Trump Administration to India's sensitivities.

At the same time, it is also indicative of the desire and the effort to have an even more robust relationship than before, she said.

"Especially over the past three to four years, we have made considerable progress. Our relations, based on common democratic values, enjoy strong political and popular support in both countries. There's a growing mutual trust and also the confidence in defence partnership, which augurs very well for the future," Ms Sitharaman said.