It was the Secretary General's sincere hope and expectation that in the forthcoming meeting in next week in Poland, India will pay a uniting role, will play the role of a good Samaritan. 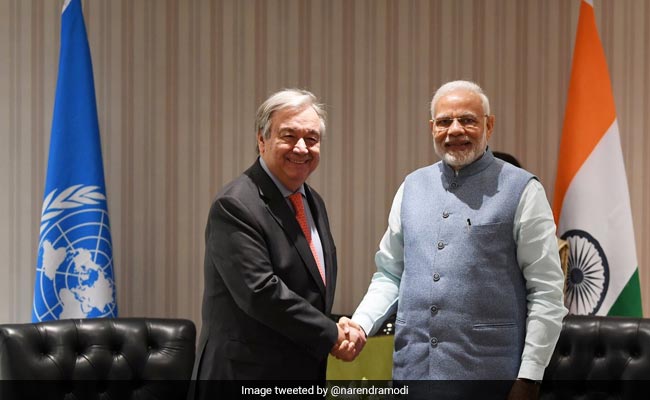 India will play its "due and responsible" role at the climate change negotiations in Poland next week, Prime Minister Narendra Modi has assured UN chief Antonio Guterres during a meeting on the sidelines of the G20 Summit.

"The Secretary General has said India plays a major role in climate change negotiations. He acknowledged that Prime Minister had taken a number of concrete steps towards addressing climate change," Mr Gokhale said.

"He mentioned the International Solar Alliance. The Secretary General also said that when he was in Delhi last month he had seen for himself the manner in which other campaigns the prime minister had led including the Swachh Bharat campaign having an impact on the environment," he said.

It was the Secretary General's sincere hope and expectation that in the forthcoming meeting in next week in Poland, India will pay a uniting role, will play the role of a good Samaritan.

He hoped that India would bring together the various groups of developed countries and developing countries -- those which have money to those which need money -- to come up with certain solution which would eventually feed into the climate change summit that the UN chief is planning in 2019, he said.

"It was a good meeting. The prime minister assured the Secretary General that India plays an important role in climate change negotiations and that it is part of the Indian culture and civilisation to preserve the environment and that he could be rest assured that India would play its due and responsible role at COP24," he said.

According to PMO sources, the UN Secretary General has reached out to prime minister Modi twice in the last two months.

They said the meeting on Thursday signifies the importance that both leaders attach to the issue of climate change.

It reflects the respect in which the prime minister and his initiatives are held globally to take the lead on issues of global importance, the sources said.