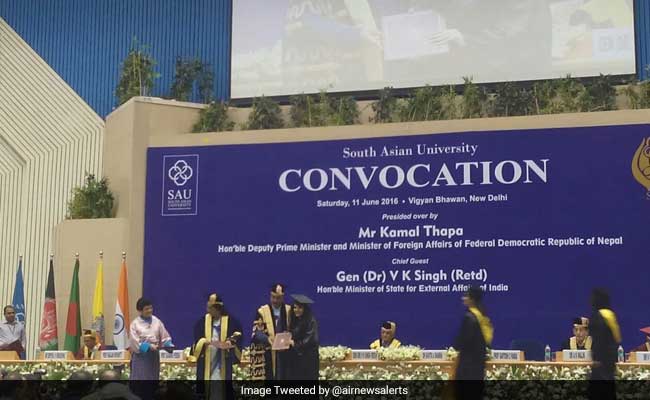 New Delhi: India today said it will bear the full cost of setting up an independent campus of the South Asian University, a SAARC institution which held its first convocation today, as it sent out a message of regional friendship and cooperation.

In his address to the graduating students in presence of Nepal's Deputy Prime Minister Kamal Thapa, Minister of State for External Affairs VK Singh, said India was committed to bear 100 per cent of the capital cost towards establishment of the university campus which is now functioning from a temporary facility in Delhi.

The Nepalese Deputy Prime Minister termed the university as a "testament" to the shared aspirations and collective prosperity of South Asia which he said can set an example of regional cooperation to the world.

Terming the students as the leaders of tomorrow's South Asia, Mr Singh advised the students to keep their spirit of "friendship" alive as their vision will make a difference to the region.

"The government has identified and allocated about 100 acres of land. The construction of the campus is in full swing and I am sure after the campus comes up it will get more disciplines and it will be a model campus for all universities," Mr Singh added.

Mr Thapa, who is on a three-day visit to India, expressed hope for shared prosperity of the region, backed by economic development and "led" by the high growth rate of India.

Contending that South Asia was not about "poverty and backwardness", Mr Thapa, who also holds the foreign portfolio, said the countries of the region have made strides in economic and social developments, especially in technology, "so much so that the world looks at us for IT support".

The South Asian university had started functioning in the year 2010.