India-Sri Lanka Should Take Economic Engagement to The Next Level: President Pranab Mukherjee 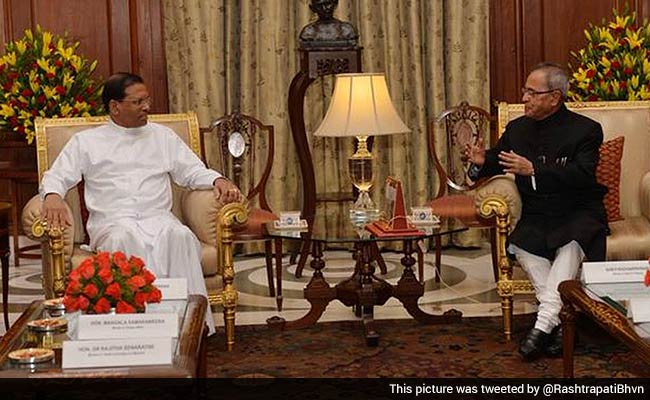 Appreciating Sri Lankan President Maithripala Sirisena for choosing India for his maiden foreign visit, President Pranab Mukherjee has said it is time to take the economic engagement between both countries to the next level.

Welcoming the Sri Lankan President in Rashtrapati Bhavan yesterday, Mr Mukherjee said in Mr Sirisena's election victory, there is an opportunity to chart a new direction in the bilateral engagement between India and Sri Lanka.

"The first FTA that India signed with any country was with Sri Lanka. It is time to take the economic engagement to the next level. There has been a resurgence in the Indian economy over the last year and Sri Lanka is well-placed to take full advantage of this," he said.

Mr Mukherjee said the support Mr Sirisena received from a wide cross section of the people reflects the eagerness of the people of Sri Lanka to strengthen its democratic leadership.

"As the largest democracy in the world, India greatly appreciates the strengthening of democracy in its neighbourhood," he said.

The President said India as a close neighbour has watched developments in Sri Lanka with deep interest as the end of the armed conflict in 2009 was a historic opportunity to find a meaningful and lasting solution to the issues concerning the Sri Lankan Tamil minority.

"The trade between India and Sri Lanka is more than USD five billion. Both countries should focus on closer economic integration by building on the Free Trade Agreement and promote cross-investments by companies. India is keen to promote greater connectivity between the two countries," he said in the banquet speech.

The President said that in contemporary times, relations between the two countries have become multi-faceted, encompassing trade and investment, science, education, security and defence, and above all, people-to-people exchanges.

He said India is privileged to be a partner in Sri Lanka's development efforts, focusing on capacity building, human resource development and infrastructure support.

"I am delighted that the flagship Indian Housing Project in Sri Lanka continues to make excellent progress. The recommencement of the iconic 'Yal Devi' train service, after three decades, between Jaffna and Colombo through the Indian-assisted Northern Railway Rehabilitation project is a matter of particular satisfaction," he said.

The President said Sri Lankan investment in India has also seen some remarkable success stories in the garments sector.

Responding to Mr Mukherjee, the Sri Lankan President said that his talks with Prime Minister Narendra Modi were fruitful and has laid the foundation for an expansion in bilateral relations, a statement from Press Secretary to Mr Mukherjee, Venu Rajamony said.

Promoted
Listen to the latest songs, only on JioSaavn.com
Mr Sirisena said India is the largest democracy in the world despite its diversity and a model for all others.

"The two countries have enjoyed good relations for thousands of years and share many things in common, especially cultural links and common values inspired by Buddhism and Hinduism.  Nobody can challenge this relationship and the future must be built on the basis of the historical relations," the statement said.