New Delhi: After Pakistan spurned basic protocol today during Foreign Secretary talks by releasing a statement while the dialogue was still in process, India responded firmly by emphasizing that it expects urgent action against Masood Azhar, the chief of terror group Jaish-e-Mohammed, which attacked the Pathankot air force base in January.

Today's meeting between Indian Foreign Secretary S Jaishankar and his Pakistani counterpart Aizaz Ahmad Chaudhry was to be held in January, but was delayed after the deadly terror strike at Pathankot in which seven military personnel were killed.

Mr Jaishankar today "clearly conveyed that Pakistan cannot be in denial on the impact of terrorism on the bilateral relationship," said a statement from India. The Foreign Secretary also stressed that India recently moved to have Azhar declared a terrorist by a UN sanctions committee, a move blocked by China through a veto, allegedly at the behest of Pakistan. 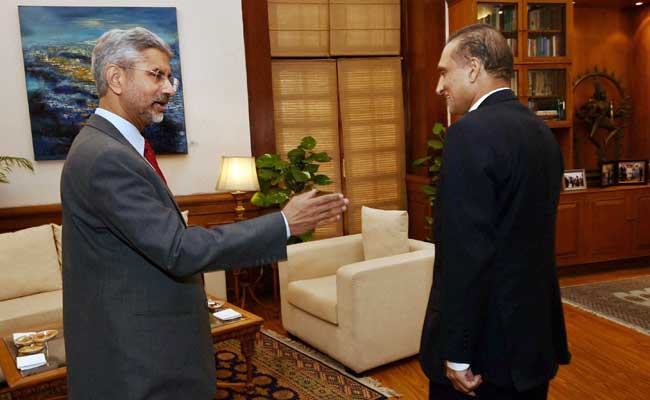 While the Pakistan statement described Jammu and Kashmir as "a core issue that requires a just solution," India focused its agenda on also firmly rebutting Pakistan's claim that a former naval officer who was arrested in Balochistan was an agent of intel agency RAW. Islamabad has said Kulbhushan Jadhav has confessed to instigating the separatist movement in the volatile province of Balochistan.

Sources say Mr Jaishankar asked acerbically "Which spy agency would put their agent in the field with their own passport, and without a visa?".   Mr Jadhav, according to Pakistan, was found with a valid Indian passport issued in a fake name and with a visa for Iran.

Today's Foreign Secretaries' session comes on the sidelines of a regional summit in Delhi about Afghanistan.