India, China Agree To Hold Next Round Of Border Talks

According to a statement by the Ministry of External Affairs, PM Modi and President Xi "noted that the Special Representatives will have another meeting on matters relating to the boundary question." 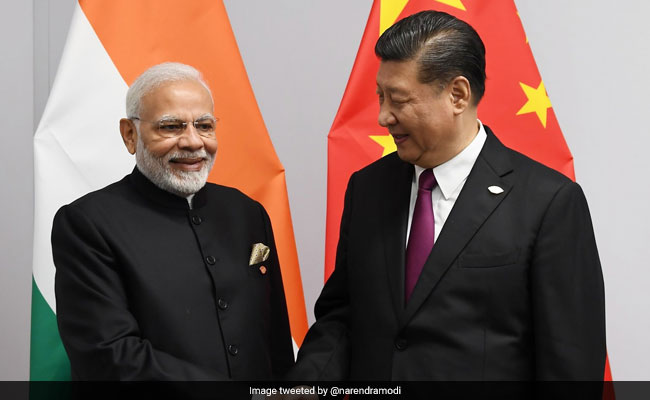 India and China have agreed to hold another meeting on matters relating to the boundary question after Prime Minister Narendra Modi met Chinese President Xi Jinping on the sidelines of the BRICS Summit, according to an official statement.

The 21st round of India-China border talks, led by Special Representatives (SR) National Security Advisor Ajit Doval and his Chinese counterpart and Foreign Minister Wang Yi, were held at Chengdu in China in November last year.

According to a statement by the Ministry of External Affairs, Prime Minister Modi and President Xi "noted that the Special Representatives will have another meeting on matters relating to the boundary question and reiterated the importance of maintaining peace and security along the border areas".

The statement, however, did not mention the time-frame for the next round of boundary talks.

During the 21st round of talks, both the sides resolved to "intensify" and "advance" the dialogue for an early settlement of the boundary dispute, according to the official statements issued by both the sides after the talks.

The two officials also emphasised on maintaining peace and tranquillity at the border by the two militaries making use of a number of mechanism worked out to improve the relations between the troops on the ground.

The SR talks are the highest official-level forum with a mandate to discuss not only solution to the boundary issue but also other issues concerning the two countries.

This year's talks were expected to be held in September in India ahead of President Xi's visit to Chennai last month for the second informal summit with PM Modi at Mamallapuram. But it did not take place due to "scheduling issues", according to officials on both sides.

The talks are now expected to take place following Wednesday''s meeting between PM Modi and President Xi at Brasilia.

After his summit meeting with PM Modi at Mamallapuram, President Xi said, "we will seek a fair and reasonable solution to the border issue that is acceptable to both sides in accordance with the agreement on political guiding principles".

"We should carefully handle issues concerning each other''s core interests. We should properly manage and control problems that cannot be solved for the time being," he said in a statement after the talks in Chennai.

President Xi also suggested that both the countries should improve the level of military and security exchanges and cooperation.

"We should promote the development of military-to-military relations in the right direction of enhancing trust, clearing up misgivings and friendly cooperation.