Al-Qaeda remains a major threat and recent developments in Afghanistan have only served to re-energise them, said India at UN. 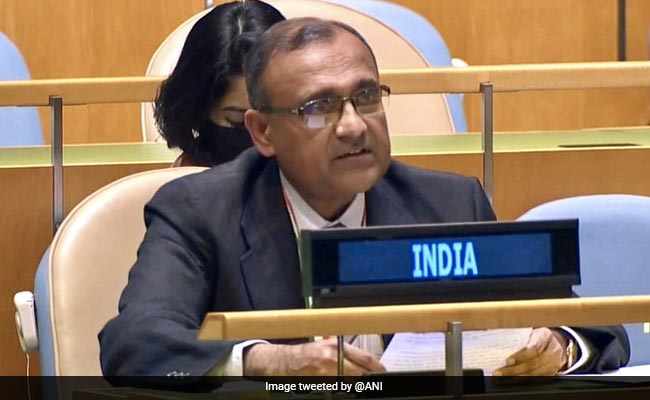 India also said that terrorism in one place can directly impact peace and security in another. (File)

Al-Qaeda's linkages with UNSC proscribed Pakistan-based terror groups like LeT and JeM has continued to strengthen, India's envoy to the UN said on Tuesday, underlining that the recent developments in Afghanistan have only served to re-energise the terrorist group.

India's Permanent Representative to the UN Ambassador T S Tirumurti told the International Counter Terrorism Conference 2022 organised by the Global Counter Terrorism Council that the Islamic State (ISIS) has changed its modus operandi with its core focus is now on regaining ground in Syria and Iraq, and its regional affiliates are strengthening their expansion, especially in Africa and in Asia.

"Similarly, Al-Qaeda remains a major threat and recent developments in Afghanistan have only served to re-energise them. Al-Qaeda's linkages with Security Council proscribed terrorist entities like Lashkar e-Taiba and Jaish-e-Mohammed has continued to strengthen. Its regional affiliates in Africa continue to expand," he said.

Mr Tirumurti said that in the global counter-terrorism domain, the 9/11 terrorist attacks in 2001 had proved to be a "turning point in our approach towards terrorism." The September 11 attacks highlighted that the threat of terrorism is grave and universal and can only be defeated by the collective efforts of all UN member states, he said.

Mr Tirumurti also said that terrorism in one place can directly impact peace and security in another.

"Consequently, the era of classifying terrorists as "your terrorist" and "my terrorist" was over. Terrorism in all its forms and manifestations is to be condemned and there cannot be any exception or justification for any act of terrorism, regardless of motivations behind such acts, and wherever, whenever and by whomsoever committed," he said, adding that the menace of terrorism should not be associated with any religion, nationality, civilisation or ethnic group.

Mr Tirumurti underlined that the global fight against terrorism is as strong as the weakest link in the global chain of member states, and the Security Council's Counter-Terrorism Committee plays a very important role in identifying such weak links and strengthening them, including by facilitating necessary capacity building.