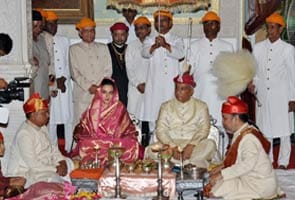 In this file photo, Samarjitsinh Gaekwad participates in his coronation ceremony with his wife Radhika Raje Gaekwad at Laxmi Vilas Palace in Vadodara

Ahmedabad: A decades-long dispute between members of one of India's former royal families over palaces, diamonds and other items worth 20,000 crores has been settled.

Members of the Gaekwad family signed a memorandum of understanding of Wednesday before a judge in the city of Vadodara over property that includes a palace reportedly four times the size of Buckingham Palace.

"We took the decision for the betterment of our families and are satisfied with the outcome and hope we will overcome the past and forge a new relationship," Samarjitsinh Gaekwad told reporters after the signing.

The dispute erupted in 1991 between two sons of the last king of the former state of Baroda.

The bitter battle, involving more than 20 members of their extended families, went on even after one of the sons died in May last year.

His son, Samarjitsinh, was pitted against  uncle Sangramsinh Gaekwad in the dispute over the considerable assets.

With the new agreement, Samarjitsinh and his family will retain the Laxmi Vilas Palace, one of India's largest private dwellings. It was built in 1890 and comes with 243 surrounding acres which include a golf course.

He will also control the museum at the palace with its paintings and diamonds and other precious jewellery.

His uncle Sangramsinh will take control of private companies, along with other real estate including the Indumati Mahal palace in Vadodara and a property in Mumbai.

Still more properties will be split between the four Gaekwad sisters.
Comments
Vadodara

Coronavirus: 42 Residents Of Gujarat's Surat Untraceable After Return From Abroad