In Uttar Pradesh's Prayagraj a man was made to marry an effigy. A priest was also present to solemnize the marriage 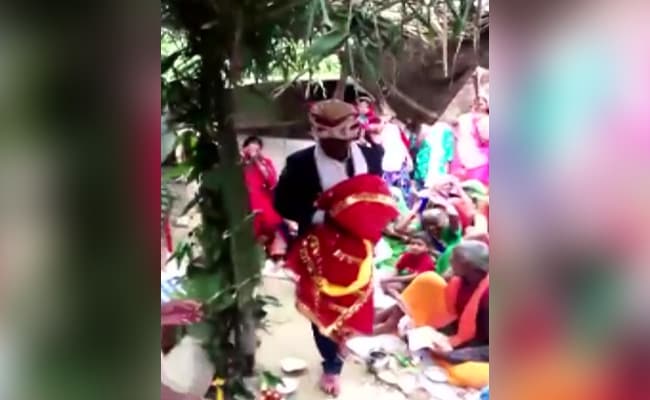 Man in Prayagraj marries a wooden effigy, all rituals were performed

A man was married to a wooden effigy with elaborate rituals in a bizarre wedding that took place in Uttar Pradesh on Wednesday.

His 90-year-old father's reason for "arranging" such a match for his son was equally inexplicable.

"I have nine sons, eight of them are married. The youngest one has no property and is not intelligent enough, so I got him married to an effigy," Shiv Mohan told news agency ANI. Reports say according to relatives, this was the old man's last wish.

Prayagraj: A man was married to an effigy in Ghurpur as per his father's wish. Father of the bridegroom says, "I have 9 sons of which 8 were married. My 9th son has no property and is not intelligent, so I got him married to an effigy. (18.06.2020) pic.twitter.com/FiONuWdAQO

The wooden "bride" was decked in a red silk and flowers and every ritual, including the 'jai mala' or exchange of garlands and 'pheras' or seven rounds of the fire, were performed. A priest was also present to solemnize the marriage.

Reports say Shiv Mohan was insistent that all his sons must be married before he dies. Relatives and local priests apparently convinced him that in the absence of a bride, an effigy will do, and it not uncommon thing.

A handful of relatives were also present and small feast was organized.

There are rituals in many parts of the country of symbolic weddings to a tree.