In Uttar Pradesh Rape and Murder, Allegations of a Caste Conspiracy 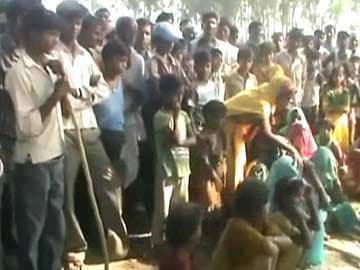 The two girls, cousins who were 15 and 14, were found dead on Wednesday, their bodies hanging from mango trees in Katra Shadat Ganj, a village in the Budaun district.

Uttar Pradesh: The rape and murder of two teenage girls in an Indian village threatened to touch off wider strife on Thursday, when the father of one of the girls said the crime was the product of a conspiracy among Yadavs, members of the dominant caste in the area.

The two girls, cousins who were 15 and 14, were found dead on Wednesday, their bodies hanging from mango trees in Katra Shadat Ganj, a village in the Budaun district of Uttar Pradesh state. An autopsy confirmed that they had been raped and strangled, the chief of the district police said. (Two Teen Sisters Allegedly Gang-Raped, Hanged From Tree in UP)

Uttar Pradesh state, like much of India, is deeply split by religious and caste divisions and has been prone to mob violence, often in reaction to sensational or violent crimes committed by members of one group against another. Against that backdrop, the father's accusations of a caste-based conspiracy are potentially explosive.

Making matters worse, two police officers are accused of involvement in the crime.

Under Indian law, neither the girls nor the father may be named in news reports.

The father, a 45-year-old agricultural laborer from a low-ranking caste, said in a telephone interview that the two girls were last seen alive Tuesday evening in a mango orchard, in the company of a man named Pappu Yadav. (The man's surname is the same as his caste.) The father said that a relative saw the girls with Yadav and two of Yadav's brothers and, for reasons he did not explain, the relative tried to intervene between Yadav and the girls.

At that point, one of the Yadav brothers pulled out a pistol "and put it to the head of my cousin-brother," the father said, using a common term in India for a close relative. "He got scared and ran away."

When he heard what had happened, the father said, he went to the local police station and asked that Yadav's house be searched. But the police officers, who are members of the Yadav caste, "took the side of the culprits," the father said. "They abused and misbehaved with us."

The next morning, when the two girls were found dead, a crowd of angry villagers gathered at the scene, accusing the police of complicity in the crime and blocking them from taking the bodies away. Calm was not restored until the early evening, after the police agreed to arrest the Yadav brothers and two police officers.

Udai Raj Singh, the chief government official in the district, said four suspects were arrested, including one of the officers; the other officer "is absconding," Singh said.

Another politician in the village, Kamal Kant Tiwari, said Yadav's family was new to the area, and few residents knew what to make of the allegations. "We know that some scuffle took place with those boys and the uncle of the girls," he said of the encounter Tuesday evening. "What happened after that is not very clear."

Promoted
Listen to the latest songs, only on JioSaavn.com
Charges of rape by a low-caste father have deep resonance here, because for centuries upper-caste Hindus were free to attack, rape and even murder those in low castes with impunity. Known victims of rape are often ostracized by their families and villages, so for years many rapes were kept quiet and never reported. That has changed somewhat in the past 18 months, after an especially vicious gang rape in New Delhi in December 2012 prompted a nationwide campaign to persuade women who have been assaulted to go to the police.