In State vs Activists, Supreme Court To Decide Today On House Arrest

The five activists --Varavara Rao, Arun Ferreira, Vernon Gonsalves, Sudha Bharadwaj and Gautam Navlakha-- are under arrest at their respective homes since August 29. 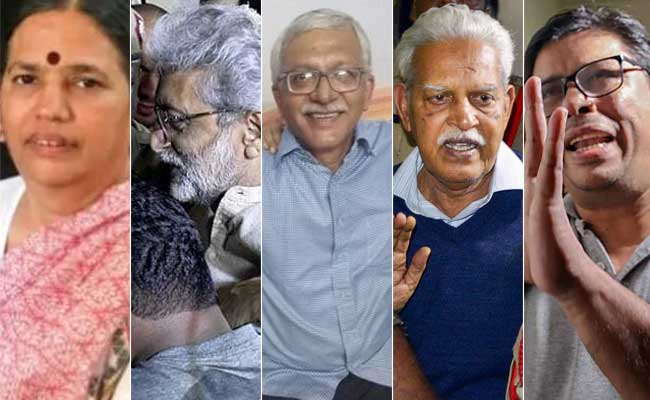 The five activists have been kept under house arrest

The Supreme Court is likely to pronounce today, its verdict on a plea by historian Romila Thapar and others seeking the immediate release of five rights activists in connection with the Koregaon-Bhima violence case and an SIT probe into their arrest.

A bench headed by Chief Justice Dipak Misra had reserved the judgment on September 20 after counsel for both parties, including senior advocates Abhishek Manu Singhvi, Harish Salve and Additional Solicitor General Tushar Mehta, concluded their submissions.

The bench, that also comprised Justices A M Khaniwlkar and D Y Chandrachud, had asked the Maharashtra police to file their case diary pertaining to the ongoing investigation in the case.

The five activists --Varavara Rao, Arun Ferreira, Vernon Gonsalves, Sudha Bharadwaj and Gautam Navlakha-- are under arrest at their respective homes since August 29.

The plea by Ms Thapar, economists Prabhat Patnaik and Devaki Jain, sociology professor Satish Deshpande and human rights lawyer Maja Daruwala, has sought an independent probe into the arrests and the immediate release of the activists.

The Maharashtra police had arrested them on August 28 in connection with an FIR lodged following a conclave -- 'Elgaar Parishad' -- held on December 31 last year that had later triggered violence at Koregaon-Bhima village in the state.

The apex court had on September 19 said it would look into the case with a "hawk's eye" as "liberty cannot be sacrificed at the altar of conjectures".

It had told the Maharashtra government that there should be a clear-cut distinction between opposition and dissent on one hand and attempts to create disturbance, law and order problems or overthrow the government on the other.

Senior advocate Anand Grover, Ashwini Kumar and advocate Prashant Bhushan had also alleged that the entire case was cooked up and adequate safeguards should be provided to protect the liberty of the five activists.

The apex court had also said that it may order an SIT probe if it found that the evidence has been "cooked up".