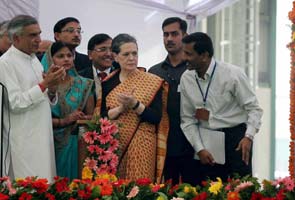 New Delhi: If the Congress' mega rally in New Delhi's Ramlila Ground was to signal a fightback, Wednesday perhaps gave a glimpse of the better party-government interface that the Congress has been talking about.

In attendance were three cabinet ministers - Railway Minister Pawan Bansal, Ajay Maken, who has recently been given the portfolio of Poverty Alleviation and Urban Housing and Anand Sharma, who accompanied Mrs Gandhi as the Textile Minister. Every Government department, that was involved with the UPA chairperson's Rae Bareily visit, issued press releases to highlight the day's events.

Explaining the context, a minister said, "See, after all, the Government is led by the Congress party. So if our leader inaugurates a scheme, should we not highlight it? Don't other parties also follow this?" Many in the political circles will view these developments with interest. In the past, many a times, the party and the Government has had to publicly clarify or dispel notions of a Government-party divide.

For example, on many occasions when the Government took unpopular decisions like raising fuel prices, Congress distanced themselves from such decisions. At times, even joined the chorus for a rollback. Even now, on the issue of putting a cap on subsidised LPG cylinders, many in the party want a rethink.

But unlike previous occasions, very few leaders have spoken out against the Government. Aware that the decision hasn't gone down well in poll-bound states like Himachal Pradesh and Gujarat, the Congress party has promised that their state governments will increase the cap if they come to power. Virbhadra Singh, for example, told voters in Himachal that if he forms the next government, the cap would be raised to 12 cylinders.

"How do we give relief to the people and yet not damage the fundamentals of the economy? That's the challenge for us," says a young Congress minister. To do precisely that, the Congress president has convened an informal samvad baithak, a dialogue where the entire Congress Working Committee, the party's highest decision making body, will be brainstorming three key issues with the  Congress cabinet ministers and Ministers of State with independent charge.

Congress leaders will review how far they have been able to implement promises they made in their manifestos, discuss the current political scenario and economic challenges.

At a meeting of the Union council of ministers on November 1, Finance Minister P Chidambaram briefed his colleagues about the economic challenges and the need to return to a higher growth path. He pointed out the Government needs at least Rs 30,000 crore from disinvestment proceeds and 100 per cent realisation of estimated tax collection to bridge the growing fiscal deficit or may have to cut social spending by Rs 50,000 crore.

And now with the Congress getting ready to plunge into the election mode before 2014, the challenge to maintain equity between popular decisions and fiscal discipline is even more.
Comments
UPA and Congress