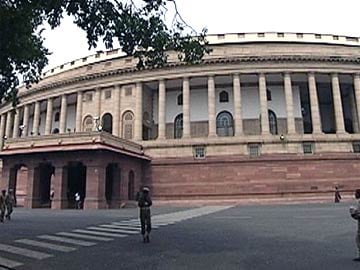 The BSP, which has a strength of 14 in the Rajya Sabha, raked up the alleged rape-cum-murder of two teenagers in Badaun, as soon as the House began its proceedings. (File photo)

New Delhi: The Rajya Sabha got off to a stormy start today with members of the Bahujan Samaj Party, or the BSP, raising a din in the House in support of their demand for the dismissal of the Akhilesh Yadav government in Uttar Pradesh for its failure to protect women.

The BSP, which has a strength of 14 in the Rajya Sabha, raked up the alleged rape-cum-murder of two teenagers in Badaun, as soon as the House began its proceedings. Party chief Mayawati led the charge. Badaun is represented in the Lok Sabha by the Uttar Pradesh chief minister's cousin, Dharmendra Yadav.

"The law and order situation is very bad. There is need for the central government to intervene and immediately impose President's Rule in the state and dismiss the Akhilesh Yadav government,'' she said, amid protests from Samajwadi Party (SP) members.

The BSP leader, however, continued with her attack on the state government, and claimed that the chief minister had failed to act on his promise of recommending a probe by the Central Bureau of investigation, or the CBI, into the
Badaun gangrape case.

Taking a cue from their party chief, BSP members rushed to the Well, raising raising slogans against the Uttar Pradesh chief minister. Three SP members too joined them in the Well, forcing Chairman Hamid Ansari to adjourn the proceedings of the Rajya Sabha for 10 minutes.

When the Rajya Sabha reassembled, the BSP MPs staged a walk-out from the House.

Promoted
Listen to the latest songs, only on JioSaavn.com
In the Lok Sabha elections, the BSP was wiped out from Uttar Pradesh, while the SP fared only marginally better, winning five seats. In the 15th Lok Sabha, the BSP had 20 MPs, the SP three more.