A loud blast brought the two-storey building down like a pack of cards late Friday night. 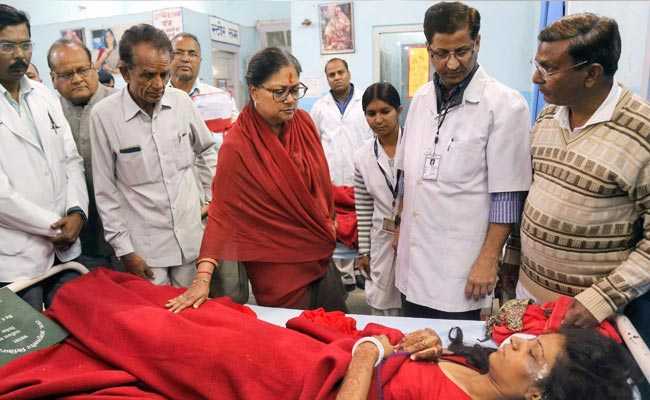 Chief Minister Vasundhara Raje visited the injured in the hospital.

At least nine persons were killed and 18 others injured when two LPG cylinders exploded at a wedding in Beawar in Rajasthan's Ajmer district, police said on Saturday.

Police said one Surendra Kumar Parecha had organised celebrations at Kumavat Samaj Bhavan in Beawar after his son's wedding on Friday night.

A loud blast brought the two-storey building down like a pack of cards late Friday night.

According to some eyewitnesses, the accident occurred when a cook was trying to refill an empty cooking gas cylinder from another cylinder. That caused a fire and subsequent explosion. The groom's mother was among those missing.

Chief Minister Vasundhara Raje condoled the deaths and announced an ex gratia of Rs 2 lakh each to bereaved families and Rs 50,000 each for the injured.

Ms Raje went to Amritkaur Hospital in Beawar as well as Jawaharlal Nehru Hospital in Ajmer and met the injured there. She called the accident tragic.

Shri Cement also announced Rs 1 lakh aid to the families of the deceased.

The Chief Minister said that owners of houses damaged in the blast will be compensated. Public Works Department officials will soon survey the losses and the compensation disbursed thereafter, she added.