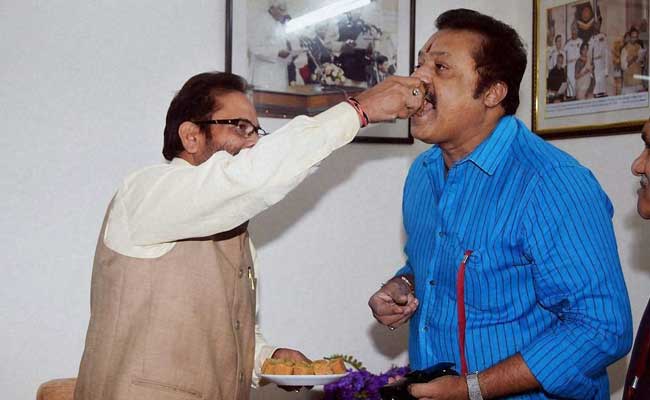 Suresh Gopi was nominated to the Rajya Sabha in April 2016.

New Delhi: Malayalam superstar Suresh Gopi has never made a secret of his political leanings. Today he made it official, joining the BJP.

"The BJP has been strengthened in Kerala with Suresh Gopi joining the party," tweeted Union Minister Mukhtar Abbas Naqvi, posting photos on the occasion.

Suresh Gopi, 57, has acted in more than 200 films and is famous for playing role of honest police officer who takes on corrupt politicians in many of his hit films. He had won the National Award for best actor for Kaliyattam in 1998.

The actor, who is also a green activist, was nominated to the Rajya Sabha by the BJP-led government at the Centre in April 2016. He had at that time said that the nomination as an artiste to the Upper House should not be seen as "political."

In the Kerala assembly elections this May, Suresh Gopi reportedly declined the request of state BJP leaders to contest from the prestigious Thiruvananthapuram constituency, but campaigned vigorously for cricketer Sreesanth who the party eventually fielded.

Promoted
Listen to the latest songs, only on JioSaavn.com
Sreesanth placed third in Thiruvanthapuram, which was won by sitting lawmaker VS Sivakumar of the Congress.

Winning one seat, Nemom, the BJP sent a lawmaker to the Kerala assembly for the first time ever. But it had 15 per cent of the vote share and sees in that a chance to rapidly expanding its footprint in the state.