The BJP's allegations against Chief MInister Siddaramaiah come two months after the government filed corruption cases against the BJP's presumptive chief minister for next year's Karnataka assembly election. The high court had stayed the probe against BS Yeddyurappa. 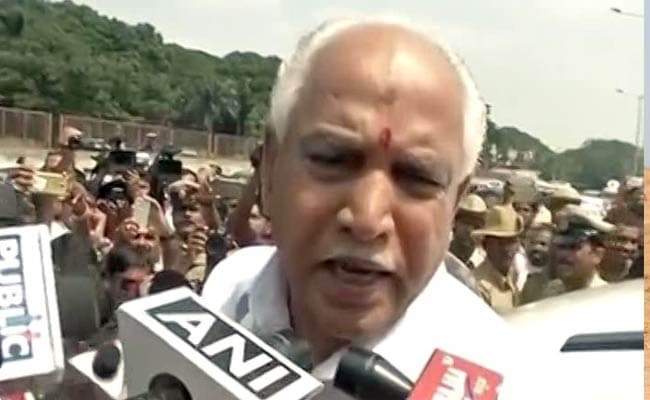 BENGALURU: Two months after the Siddaramaiah government filed corruption cases against the BJP's presumptive chief minister for next year's Karnataka assembly election, BS Yeddyurappa on Saturday came up with what he called was a "mega coal scam" involving Karnataka's chief minister Siddaramaiah and his power minister DK Shivakumar.

"Chief Minister, Siddaramaiah, and power minister DK Shivakumar have taken bribes, kickbacks to get the public sector Karnataka Power Corporation limited to pay a penalty of 447 crores that they were not liable to pay," Mr Yeddyurappa said at a media conference on Saturday. Mr Shivakumar had been raided by tax authorities earlier this year, while he was minding Congress lawmakers from Gujarat ahead of the Rajya Sabha elections.

The BJP's face in Karnataka demanded that the CBI should probe the "scam".

The revelation was Mr Yeddyurappa's comeback to the corruption charges that had been filed against him right before he was to lead a protest targeting corruption in the Congress government in August.

But before the return fire today that reflects the bitter campaign that could follow for next year's election, the state BJP president had approached the high court and got a stay on the probe in the fresh cases against him.

Underlining that he could back his allegations with documents, Mr Yeddyurappa said the state-run firm had paid 110 crores in penalties in 2014 and 337 crores in 2017 though there was no need to.

In 2014, when the Supreme Court cancelled all coal mining licenses and levied huge penalties, Mr Yeddyurappa said EMTA, a private firm which has tied up with the state's power corporation, should have paid the money. Instead, the corporation was made to pay up.

"All charges and allegations are baseless lies. He (Mr Yeddyurappa) is being misguided by people I think. He is being controlled by people who are taking him in a wrong direction," he said.

This is the second allegation levelled at the Chief Minister by the BJP within the last week.

On Monday, the state BJP unit had announced it had filed a complaint against Mr Siddaramaiah, accusing him of bribery for a decision that cost the Bengaluru development authority 300 crores.
Comments
Karnataka Chief Minister SiddaramaiahKarnataka BJP president BS YeddyurappaKarnataka Assembly Elections 2018