India-China: According to the report, China has ''started constructing at least 13 entirely new military positions near its borders with India". 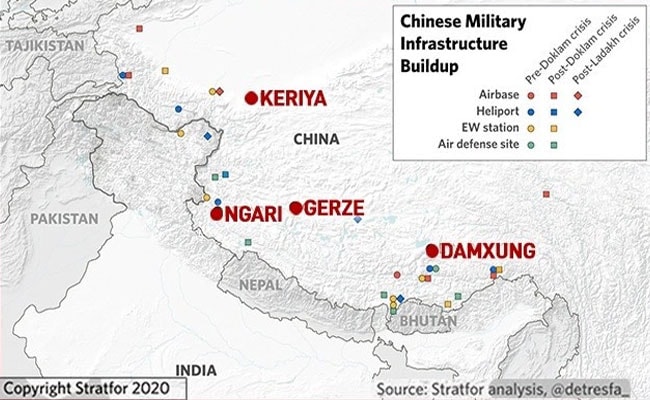 China's military build-up of air defences along the India frontier began after the 2017 Doklam crisis.

The 2017 Doklam crisis which played out between China and India in a part of Bhutan located east of Sikkim ''appears to have shifted China's strategic objectives, with China more than doubling its total number of air bases, air defence positions and heliports near the Indian border over the past three years".

Details of the Chinese expansion, accessed by NDTV, have been spelt out in a yet-to-be-released report by Stratfor, a leading global geopolitical intelligence platform. The report outlines China's military-infrastructure build-up through a detailed analysis of satellite images of military facilities that have a direct bearing on India's security.

"The timing of the Chinese build-up of military facilities along the border with India just prior to the ongoing Ladakh standoff suggests these border tensions are part of a much larger effort by China to assert control over its border regions," says Sim Tack, a Senior Global Analyst with Stratfor and the author of the report.

The consequences of this for India, which has been involved in a violent face-off with China in eastern Ladakh since early May, seem clear. ''Once finished, this infrastructure will provide support for an even greater intensity of Chinese operations."

According to the report, China has ''started constructing at least 13 entirely new military positions near its borders with India". This includes three air bases, five permanent air defence positions and five heliports. ''Construction on four of those new heliports started only after the onset of the current Ladakh crisis in May," it says. 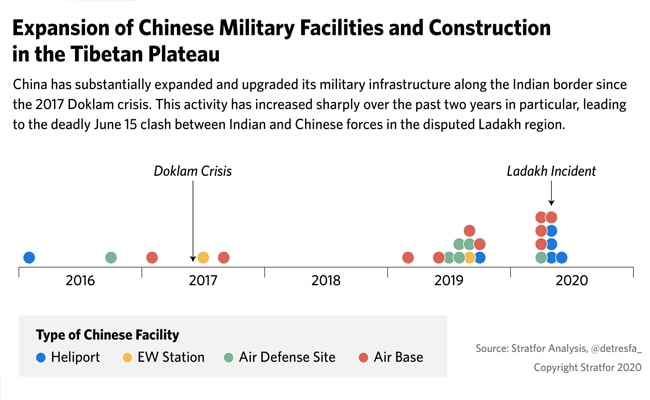 China's military build-up along the India frontier, the report says, is part of a bigger strategy similar to its goals in the South China Sea where Beijing has dredged land around tiny coral atolls to develop full-fledged air bases and Naval facilities.

Several countries in the Asia-Pacific belt have categorically rejected Beijing's claim that the area lies within its jurisdiction. In May this year, India, which champions the freedom of navigation in international waterways along with the United States said, ''the South China Sea is a part of the global commons and India has an abiding interest in peace and stability in the region,'' remarks likely to irk Beijing which is wary of India's close strategic partnership with Washington.

By applying the same strategy along its land frontier with India, ''China aims to discourage Indian resistance or military action during future border disputes by ostentatiously demonstrating its ability and intent to engage in military confrontations.''

Key in attempting to expand its military dominance in the area is China's emphasis on building up its air power. ''The Chinese military is currently building four similar air defence positions within existing air bases and other facilities. This includes additional runways, as well as aircraft shelters that will help obscure the true presence of combat aircraft at these bases from observation.''

In May this year, NDTV had reported how satellite images show massive construction activity at Ngari-Gunsa airport in Tibet, located just 200 kilometres from Pangong Lake where Indian and Chinese soldiers remain in a standoff on both banks of the lake. The construction of this base was meant to support the deployment of Chinese People's Liberation Army Air Force fighter jets, including the J-11 and J-16, home-grown variants of the Sukhoi-30 combat aircraft which is the mainstay of the Indian Air Force. It is believed that construction at this base has expanded substantially since the publication of the NDTV report.

India and China continue talks at multiple levels to try and disengage forces along the Line of Actual Control in Ladakh. The latest round of talks between Generals of both sides which began on Mondo near Moldo on the South Bank of the Pangong Lake lasted approximately 13 hours. There are no immediate indicators of any break through. At least 20 Indian soldiers including a Colonel and an unknown number of Chinese troops have been killed in clashes in Ladakh with Chinese forces blocking Indian Army and Indo-Tibetan Border Police (ITBP) patrol points across the frontier. India, for its part, has pre-empted a similar move in South Pangong where it presently dominates Chinese positions. Both sides continue to jostle for the high-ground on both banks of the Pangong Lake, sometimes at altitudes nearing 20,000 feet.