In 11 Days, Over 1.28 Lakh Tourists Visit Statue Of Unity

Over 24,000 tourists visited the site on Sunday and more than 27,000 Saturday, senior official said. 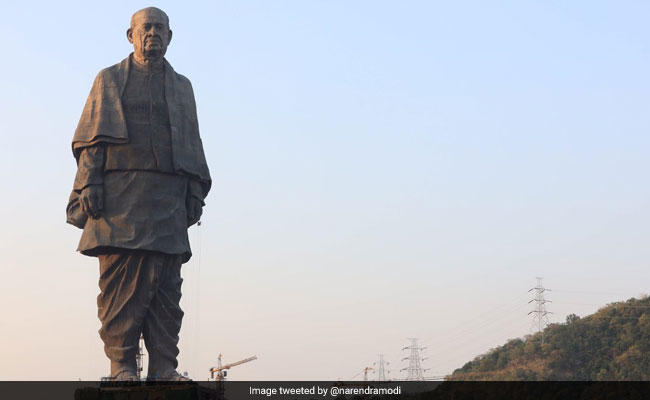 The towering structure is nearly twice the height of Statue of Liberty.

Since opening for the public on November 1, the 182-metre tall Statue of Unity in Narmada district of Gujarat has attracted more than 1.28 lakh tourists, officials said.

A huge rush of tourists was seen during the weekend, with over 50,000 people visiting the world's tallest statue at Kevadiya village on Saturday and Sunday alone (November 10- 11), they said.

"Since November 1, when the statue opened for the public, we have recieved around 1.28 lakh tourists (till Sunday)," Superintending Engineer of Sardar Sarovar Narmada Nigam Ltd (SSNNL) R G Kanungo said.

The statue, dedicated to 'Iron Man of India' Sardar Vallabhbhai Patel, is situated on an islet near the Sardar Sarovar Dam in Kevadiya. It was inaugurated by Prime Minister Narendra Modi on October 31.

Talking to PTI, Principal Secretary (Tourism) S J Haider said more than 10,000 tourists had visited the statue on the very first day of its opening.

"The number of tourists kept on increasing since November 1," he said.

Mr Haider said the government is ready to welcome any number of tourists at the site.

He said the new tourist attraction in Gujarat will help increase the number of travellers visiting the state from other parts of the country and also abroad.

"Gujarat has registered 17 per cent year-on growth in tourism with a total 5.2 crore tourists visiting the state in 2017. The Statue of Unity will help in achieving considerable growth in arrival of tourists to Gujarat," he said.

The towering structure, built at a cost of Rs. 2,989 crore, is nearly twice the height of Statue of Liberty in United States and also bigger than Spring Temple Buddha, China (153 metres) and Ushika Daibustum Japan (120 metres).

Along with the Statue of Unity, Gujarat Tourism has added many attractions nearby for sight-seeing. Two tent cities have been created along the backwater lakes of the Narmada dam reservoir for tourists who want to stay there.

Among the prime attractions at the site is a viewers gallery inside the statue located at a height of 135 metres with a capacity to accommodate 200 persons at a time.

High-speed lifts installed there are capable of taking 5,000 people per day to the viewing gallery, which offers a panoramic glimpse of the surrounding areas.

The ambitious project was announced in 2010 and a special purpose vehicle was set up by the state government for its construction.