"I am Hindu! I am Indian," said Tejashwi Yadav in a tweet that shows a photo of him holding a poster opposing NRC and Citizenship Act. 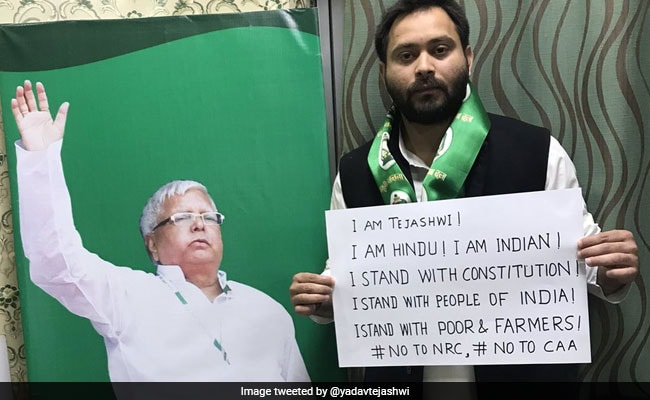 Tejashwi Yadav led a rally as part of the "Bihar Bandh" against the Citizenship (Amendment) Act.

Rashtriya Janata Dal (RJD) leader Tejashwi Yadav today backed the nation-wide protest against the Citizenship (Amendment) Act. "I am Hindu! I am Indian," said Tejashwi Yadav in a tweet that shows a photo of him holding a poster opposing both the National Register of Citizens (NRC) and the amended citizenship law.

I am Hindu. I am Indian. I am against #CAA_NRC. #BiharBand#IndiaAgainstCAA_NRCpic.twitter.com/uwy8Jrzyvo

The photo shows him standing next to a poster of his father and jailed RJD chief Lalu Yadav, who is serving sentences in the fodder scam case.

The former Deputy Chief Minister of Bihar led the rally as part of the "Bihar Bandh" called by the RJD against the Citizenship (Amendment) Act.

A national flag in hand, Tejashwi Yadav was seen marching on the streets in Patna, where he asked people to participate in "Bihar Bandh". 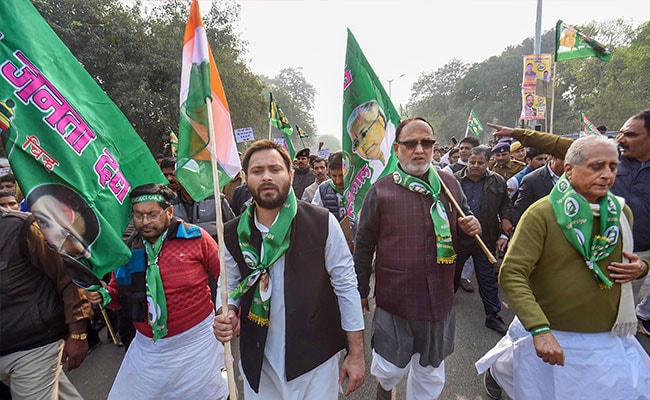 Last week, Lalu Yadav tweeted to oppose the newly amended act. "The flames of my eyes are still burning bright and my principles are still alive, you people must not feel dejected as the sick man is still alive. I am still capable of taking on enemies despite having suffered a thousand wounds, thank God, my self-respect is intact," he tweeted.

On Friday, thousands defied statewide prohibitory orders to voice their opposition to the amended citizenship law on the streets.

The Citizenship (Amendment) Act, which cleared the parliament last week, for the first time makes religion the test of citizenship in India. The government says it will help minorities from three Muslim-dominated countries to get citizenship if they fled to India before 2015 because of religious persecution. Critics say it is designed to discriminate against Muslims and violates the secular principles of the constitution.